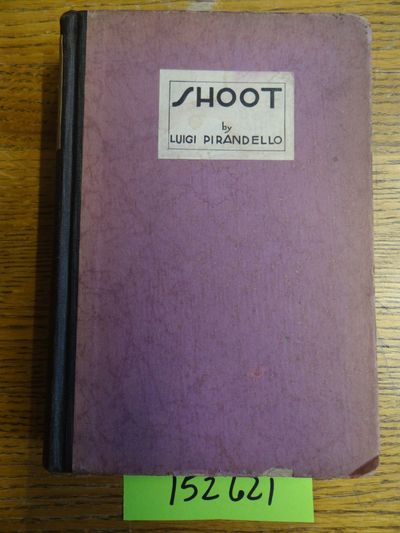 by Pirandello, Luigi
New York: E. P. Dutton & Company, 1926. Hardcover. Good. Clean, unmarked pages. Covers have general age wear to edges and peeling to cardboard layers at corners. End papers split at front gutter, but mesh liner keeps binding together.. Veined magenta paper/boards. Laid on cream title label with black lettering. Black cloth spine with matching title label. Decorative end papers. 376 pp. with no illus. Page top ends magenta. "Originally published in Italian in 1915, Shoot! is one of the first novels to take as its subject the heady world of early motion pictures. Based on the absurdist journals of fictional Italian camera operator Serafino Gubbio, Shoot! documents the infancy of film in Europe—complete with proto-divas, laughable production schedules, and cost-cutting measures with priceless effects-—and offers a glimpse of the modern world through the camera's lens. Shoot!, presented here in its English translation (by C.K. Scott Moncrieff), is a classic example of Nobel Prize-winning Sicilian playwright Luigi Pirandello's (1867-1936) literary talent and genius for blurring the line between art and reality. From the film studio Kosmograph, Pirandello's Gubbio steadily winds the crank of his camera by day and scribbles with his pen by night, revealing the world both mundane and melodramatic that unfolds in front of his camera. Through Gubbio's narrative—saturated with fantasy and folly—Pirandello grapples with the philosophical implications of modernity. Like much of Pirandello's work, Shoot! parodies human weaknesses, drawing attention to the themes of isolation and madness as emerging tendencies in the modern world." - http://press.uchicago.edu/ucp/books/book/chicago/S/bo3642117.html. (Inventory #: 152621)
$29.99 add to cart or Buy Direct from Mullen Books
Share this item

Mark Twain and his illustrators (Vol 1)

New York : Tudor Publishing Co , 1971
(click for more details about Homage To Pablo Picasso)
View all from this seller>