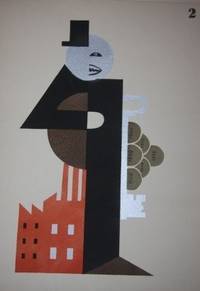 by Deltor, Fred [pseudonym for Frederico Antonio Carasso] (1899-1969). Preface by Henri Barbusse
Bruxelles: Les Editions Socialistes. First Edition. Folder. Paper pastedown on a heavy card stock. . Very Good. Signed by the artist on the front cover and dated 1928. (The album may have been issued in 1925, but bears no printed date.) 317 by 243 mm. One leaf, with playful carnivalesque preface by Barbusse on the recto and a key on the verso, with the title or subject of the following 12 pochoir plates rendered in six languages (French, Dutch, German, English, Russian, Italian and Spanish), with some power deriving from the repetitive similarities for the words in the different languages. Each plate an allegorical depiction of an enemy of the working class: militarism, property, philanthropy, social democracy, "justice", colonialism, fascism, "police spy", parliamentarism, "middle-spirit", religion and patriotism. The artwork, a heady mix of Cubist, Constructivist, Futurist and Dada-ist styles, has a sculptural quality, which is no accident given that Deltor eventually gained renown for his monumental public works. Deltor was a refugee from Fascist Italy. He first settled in Paris in 1922, where he was expelled six years later for his political activism. From there he went to Brussels and eventually settled for good in the Netherlands, where he won wider recognition. Also heightening the visual excitement are the muscularity of the coloration, with metallic silvers and golds and even blues, brash reds, unusual yellows, greens and other colors. And whatever one's politics, or for that matter, view of Modernism, one is likely to succumb to the wit and zest of the imagery. The subtitle of the set, "12 Personages in Search of One", would seem a play on the Pirandello play title "Six Characters in Search of an Author," which premiered in 1921. Foxing on the folder, which has slight chipping to its spine. Minor rubbing and wear by edges. Along the spine or joint edge appears the shadow remnants of tape that might have once run along it as a makeshift repair. Marginal toning to the plates. (Inventory #: 004645)
$15,000.00 add to cart Available from
White Fox Rare Books & Antiques
Share this item
White Fox Rare Books and Antiques
Offered by