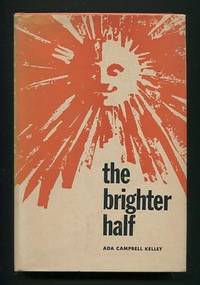 by Kelley, Ada Campbell
New York: Greenwich Book Publishers, Inc.. Very Good+ in Very Good dj. (c.1965). First Edition. Hardcover. NOISBN . [minor soiling to cloth at top and bottom edges, no other significant wear; jacket somewhat faded at spine, with light overall soiling and age-toning]. Certainly one of the odder memoirs (if that's what it is) you're likely to encounter. The bulk of the book is the story of a woman named Anna Goldman Denny, who (like the book's author) is a native of St. Louis. She chronicles her life from childhood through her early career as an office worker in St. Louis and Chicago, her service with the Red Cross (stateside) during World War I, and in particular her long affair with an older man in her office (she confesses at one point in her narrative to "the sex attraction I had for those older men"). This fellow eventually divorces his wife so he and Anna can marry (in 1920), but his death just five years later launches her into a new phase of life. She goes first to Florida, then to Greenwich, Connecticut, where she somehow catches the wave of the contract bridge craze and becomes a prominent teacher of this newly-introduced "modern" form of this card game, gets enough gigs and enjoys enough success that she's able to travel to Europe and invest in the stock market (you see that end coming, right?), and even publishes a popular book about the game. Now at this point, it seems pretty clear that "Anna" is an autobiographical stand-in for author Campbell, described in the jacket blurb as "one of our first teachers of contract bridge," who indeed write a tome entitled "Auction and Contract Bridge: Complete--Condensed" (The John Day Company, 1930) -- but other than that episode and their shared birthplace, the life-chonicles of Ada and "Anna" don't seem to coincide very well, so how much is invention and much memoir? Furthermore, we now have to grapple with the narrative structure of the book itself: its first four chapters aren't by Anna/Ada at all, but by a guy named Jack, who tells the story of being introduced to Anna in Southern California (where she'd ended up after the stock market crash had forced her back into the regular working world), falling in love with her, and asking her to write down the story of her life, to tide him through an impending separation. SO -- most of the rest of the book is essentially the manuscript she produces in response to that request (and which often addresses Jack directly, e.g. "Jack, I wish you could have known my mother.") And just to add to the meta-ness of it all, that narrative is occaionally punctuated by a "Dear Jack" letter, in which she comments on her feelings while she's been writing the thing. Confused yet? Starting to wonder if this is really a memoir, or some kind of novelistic projection of a romance that never actually happened? Was there actually a "Jack," or was this just a framing-device excuse to write a memoir without using her real name? (Don't look to me for the answers, I'm still trying to figure it out myself.) There are other interesting episodes in Anna's life, notably a job working in a large San Francisco department store, and a brief stint (in Beverly Hills) as managing housekeeper for fading movie matinee idol Richard Dix. I should make it clear that I'm not in any way mocking this book or is author: it's well enough written, it benefits from the maturity of her authorial voice, and many of the episodes of her life are genuinely interesting, especially as they reflect on the realities of a single (later widowed) woman trying to make a living in early-20th century America. (The years covered by the book are roughly 1900 -- Anna refers to childhood memories of the St. Louis World's Fair of 1904 -- to the mid-1930s; the "Dear Jack" letter that prefaces the manuscript is dated September 1934.) And in case you're wondering, Jack himself does come back into the picture at the very end of the book, with an "Anna Dear" letter of his own, dated November 11, 1934 -- although I have to say, it doesn't provide quite the ending one might expect. . (Inventory #: 20501)
$40.00 add to cart Available from ReadInk
Share this item
ReadInk
Offered by

Lady Susan [and] The Watsons; with a memoir, and letters

New York : The Athenaeum Society , (c.1892)
(click for more details about Lady Susan [and] The Watsons; with a memoir, and letters)
View all from this seller>