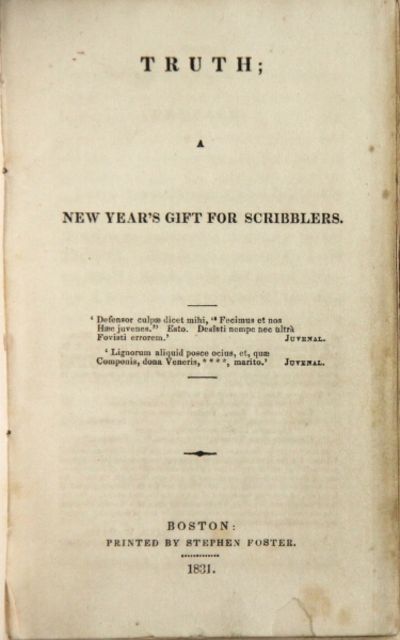 by [Snelling, William J.]
Boston: Stephen Foster, 1831. First edition of the author's first book of poetry, 16mo, pp. vi, [7]-52; without the errata slip (not present in all copies); a nice copy in original muslin-backed drab boards, the cloth a little nicked and brooken along the spine. Snelling (1804-1848) was the son of Josiah Snelling, commandant of the fort that bears his name at the confluence of the Minnesota and Mississippi Rivers in St. Paul. William lived at Fort Snelling for seven years (1820-27) where he became familiar with the Indians, their language and habits. After returning east, he wrote many newspaper and magazine articles, and several books which drew on his experiences with the Indians, and this poem, a satirical commentary on the state of American poetry and poets "that rocked the small literary world of Boston for a time. [But] the onslaughts of his political and literary foes, combined with personal misfortunes, gradually drove him to dispair, and he took refuge in drink. To the great delight of his ill-wishers, he spent four months in the House of Correction, but he emerged broken, rather than in health or in spirit. He continued as an independent journalist and in 1847 became the editor of the Boston Herald, which he conducted with great vigor for one year before he died, in Chelsea, at the age of forty-four, burned out... Snelling is best remembered as ... the author of Truth, which is one of the best verse satires ever written in America" (DAB). BAL 18413. (Inventory #: 48475)
$373.75 add to cart or Buy Direct from
Rulon-Miller Books
Share this item