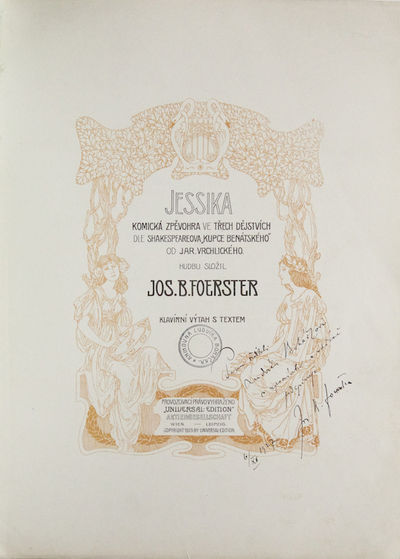 With an autograph inscription by the composer in Czech in black ink to Ludvík Boháček, signed "Jos. B. Foerster" and dated December 6, 1927 to title.

Handstamp "Knihovna Ludvíka Boháčka" (Library of Ludvík Boháček) to title and p. 3. Manuscript notational additions in pencil to pp. 57-59 and penciled annotations including a list of pages to verso of upper wrapper, possibly referring to cuts; a date of "4/VIII/65" to handstamp on p. 3; and Rozhlas 17/12/1959" (Radio December 12, 1959), most probably referring to a broadcast of the opera.

Wrappers somewhat worn; spine with tape repairs. Slightly browned; some leaves frayed. First Edition (Czech version). Rare. WorldCat (no copies in North America). Universal Edition published the opera simultaneously in a Czech and in a German version; copies of the German version are more widespread. Dated according to copyright notice. There is no evidence of any later issues.

First performed in Prague on April 16, 1905. "A light-hearted adaptation of The Merchant of Venice." Oldřich Pukl (with John Tyrrell) in Grove Music Online.

Ludvík Boháček (1900-1959) was head of the library in the town of Tynec nad Sázavou, south of Prague. During the occupation (1939-1945) he rescued discarded books by banned authors and secretly lent them to his friends; he also organized conspiratorial meetings of the local underground in his library. (Inventory #: 26193)
$358.00 add to cart or Buy Direct from
J. & J. Lubrano Music Antiquarians
Share this item