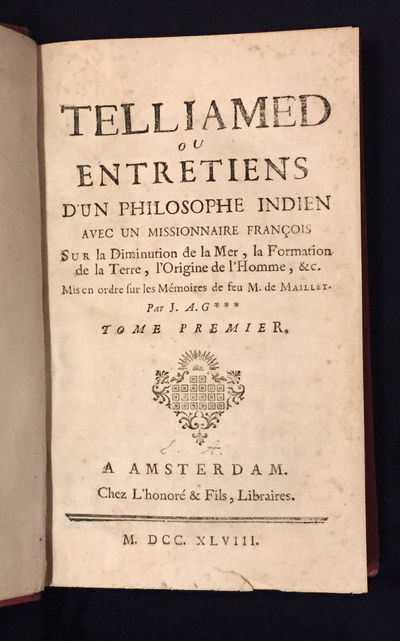 by MAILLET, Benoit de
Amsterdam: Chez l'honore et fils, libraires, 1748. First Edition. Hardcover. Very good. 2 vols. in one. 8vo. I: [10], cxix, [7], 208 pp. + 1 f. ("Errata" for Tom. 1). II: [2], 231 pp. + 1 f. ("Addition") + 1 f. ("Errata" for Tom 1 [sic]). First title page with unobtrusive paper defect on lower margin, not affecting text; this copy is lacking half-title and Errata leaf for Tom. 2. Very attractive 19th-century French red glazed boards, red morocco spine, lettered in gilt directly (two insignificant worm-holes on lower hinge, leading nowhere; trifle wear to binding extremities. Completely unsophisticated. First printing of "Telliamed," in every way a remarkable book. Disguised as an Oriental fantasy, it contains perhaps the earliest appearance of one of the most important of all evolution speculations, namely the so-called ultra-neptunian theory: that the entire Earth was, and is, a marine deposit, and that all life on land originated from creatures of the sea. Maillet hypothesized that the earth was once entirely covered with water, and that the water gradually evaporated into space, causing land masses to appear. Maillet also created an ingenious methodology to calculate the age of the Earth: he concluded that the Earth is 2 billion years old (evolutionists today consider this figure to be more like 4.5 billion). It is known that Buffon, Lamark, Cuvier and Darwin read this book, and that they were very much influenced by Maillet's unorthodox, heretical views. Well aware that such an immense figure would incur the wrath of the Church, de Maillet presented his conclusions in the guise of a dialogue between a French missionary and an Eastern mystic named Telliamed, i.e. de Maillet spelled backwards. The manuscript remained unpublished until a decade after Maillet's death. In order to present his radical conclusions in the guise of an Oriental tale, Maillet interspersed monsters and mythological creatures into his text. Overtly anti-Christian, "Telliamed" dismisses the Flood of the Old Testament as a fable because rainfall that lasted forty days would have been insignificant to submerge entire mountains. Maillet asserted that the Earth's history could not be read from the Bible but through the rocks themselves. ¶ With uncanny prescience, Maillet describes how species have overlapping physical characteristics that suggested a common life origin, namely the sea. Through a Oriental mystic we are told that: "The little Wings had under their Belly, and which like their Fins helped them to walk in the Sea, became Feet, and served them to walk on Land." ¶ REFERENCES: Caillet, No. 7009. Versins Utopie p. 640. LITERATURE: "Charles Darwin et ses Precurseurs francais (Paris, 1870) Chapter 1: "the moss-grown fragments from the ruins of another world." See also Albert Carozzi, "De Maillet's 'Telliamed' (1748): An Ultra-Neptunian Theory of the Earth" in: Toward a History of Geology; Proceedings of the New Hampshire Inter-Disciplinary Conference on the History of Geology, Sept. 7-12, 1967. Mary Efrosini Gregory, "Evolutionism in Eighteenth-century French Thought" Chapter 1. See also the article on Maillet in DSB, IX, pp. 26 et seq: "Maillet's ideas unquestionably influenced many leading naturalists for almost a century, notably Buffon and Cuvier. (Inventory #: 1641)
$1,750.00 add to cart or Buy Direct from
Michael Laird Rare Books
Share this item