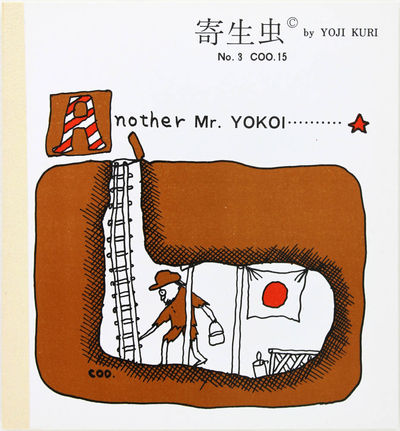 by KURI, Yoji
[Tokyo: Self-published, c. 1972]. Fine in illustrated wrappers.. First Edition. Square octavo. SIGNED by Yoji Kuri: No. 3 of his series COO.15. Kuri is a well-known Japanese cartoonist, independent filmmaker, and pioneer of Japanese animation. This artists' book features 22 cartoon cells of a story about a militant living on a remote island and his fantastical but brief vacation back to civilization. The title refers to a famous story about Shoichi Yokoi, a Japanese solider who hid in the jungle of Guam for 28 years after the end of World War II, still believing it was taking place. Exceptional book, not known in the West. No copies in OCLC. (Inventory #: 20891)
$250.00 add to cart or Buy Direct from Harper's Books
Share this item
Harper's Books
Offered by