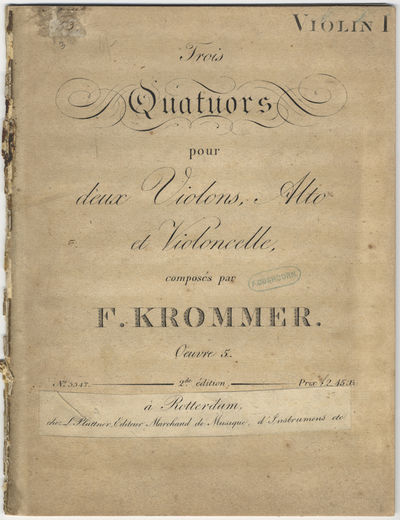 With overpaste of L. Plattner, Rotterdam, to Violino primo part. Earlier owner's name, "F. Oushoorn," handstamped to each title page. Annotation in ink to upper left corner of title of both violin parts; part names stenciled to upper right corner of each title; measure numbers added in pencil in a modern hand throughout.

Browned and somewhat soiled; closely trimmed, with some loss to manuscript annotations, headers and pagination. An early lithographic imprint. Constapel p. 208. RISM K2615 (no copies in the U.S.).

"Krommer was one of the most successful of the many influential Czech composers in Vienna at the turn of the 18th century. His creative output comprises over 300 works... Krommer's reputation is attested by the rapid spread of his compositions in reprints and arrangements by German, Danish, French, English, Italian and American publishers... He was regarded (with Haydn) as the leading composer of string quartets, and as a serious rival of Beethoven... His modes of expression extend from the galant style of the earlier 18th century to Romanticism." Othmar Wessely in Grove Music Online. (Inventory #: 25738)
$204.00 add to cart or Buy Direct from
J. & J. Lubrano Music Antiquarians
Share this item