Great Tartary, The Isle of Japon 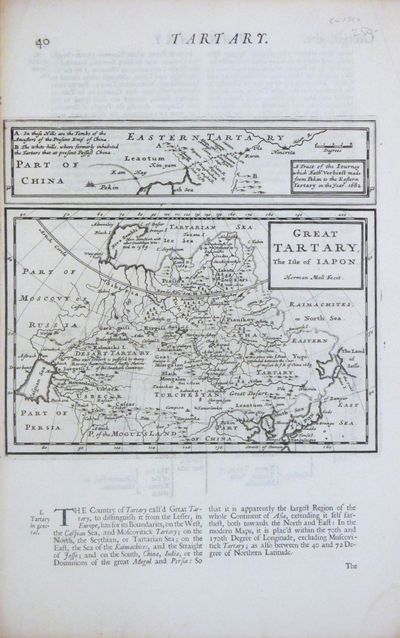 by MOLL, Herman
London: Moll, Herman. unbound. Map. Uncolored copper plate engraving. Image measures 6 1/2" x 7 1/4". Sheet measures 12 3/4" x 7 7/8" This small map depicts the northern Asia or what was then known as Tartary and Japan and extends from the largely misshaped Caspian Sea eastward to Japan and from Korea or Corea (here depicted as an island) north as far as the Arctic Sea and Nova Zembla. Several important places from the era, including Tartary, Turchestan, Usbeck, Part of Mogul's Land, Yupi, Cathay, Part of China as well as important cities such as Pekin, Thibet, Samarcand, Kafear, Balch (some of which were part of the ancient Silk Route) are noted throughout. Interesting notations are also included, including near Nova Zembla, 'Here Hemskirk with other Dutchmen wintered in 1569', 'at this place was the peace concluded between the Czar of Moscoaw and the Empire of China 1689', etc. The Great Wall of China is noted, but not identified.Perhaps the most interesting feature is the mapping of the Island of Japan, with an indistinct northern boundary, almost suggesting that the island may have been connected to the mainland. The map also notes the Straits of Vries which were believed to separate Asia from America. Above the main map is another narrow map detailing the route taken by Father Verbiest, a Flemish Jesuit missionary in China, from Pekin (Peking) to Eastern Tartary in 1682. This map also features interesting notations and notes important places. English text appears below the map proper as well as on verso. The map is in good condition with minor wear to the bottom edge. Nice dark impression. Of German or Dutch origin, Herman Moll (c. 1654-1732) settled in London in the 1670's where he worked as an engraver for Moses Pitt. By the turn of the century, Moll became the foremost map publisher in England, where he produced Atlases and maps. As an engraver, cartographer, mapseller and globemaker he appealed to the public with his unusual views and vignettes. As the demand for his work was sustained, he issued many revised editions of his work. (Inventory #: 264504)
$250.00 add to cart or Buy Direct from
Argosy Book Store
Share this item