Vicar of Wakefield, The 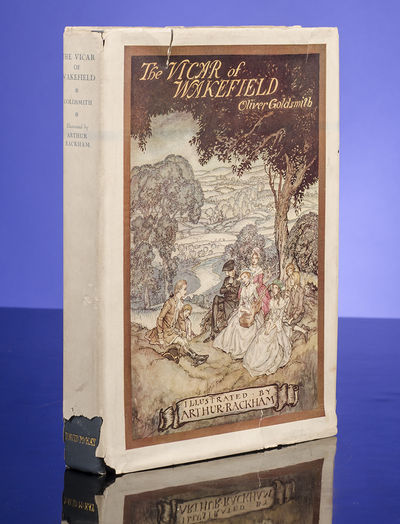 "In the England of jazz and Noel Coward the whimsical and fantastic had grown increasingly out of fashion. With The Vicar of Wakefield of 1929 ... Rackham played it safe by turning to historical costume... in which he had long been supremely accomplished and successful" (Hudson, p. 126).

"The Vicar of Wakefield is a novel by Irish writer Oliver Goldsmith. It was written in 1761 and 1762, and published in 1766, and was one of the most popular and widely read 18th-century novels among Victorians. The novel is mentioned in George Eliot's Middlemarch, Jane Austen's Emma, Charles Dickens' A Tale of Two Cities and David Copperfield, Mary Shelley's Frankenstein, Sarah Grand's The Heavenly Twins, Charlotte Brontë's The Professor and Villette, Louisa May Alcott's Little Women and in Johann Wolfgang von Goethe's The Sorrows of Young Werther, as well as his Dichtung und Wahrheit." (Wikipedia).