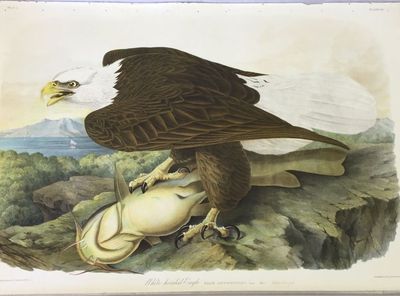 by Audubon, John James
New York: J. Bien, 1860. First Bien Edition. Near Fine. John James Audubon. Double-elephant Folio (39 9/16" x 27 1/16"; image: 37 1/8" x 25 1/2"), "White headed Eagle Falco Leucocephalus. Linn. Male. Yellow Cat-fish" (numbered in upper right "Plate 14") from The Birds of America, unwaterrmarked as issued, first-run chromolithograph with hand-coloring, J. Bien edition, 1860. For many collectors, one of the most desireable--yet affordable--plates of John James Audubon's "Birds of America" is this "White headed Eagle" IPlate 14)--our national bird--from the chromolithographed edition prepared by Julius Bien. Julius Bien was a New York printer who had mastered the increasingly popular field of chromolithography, a recent advance in print-making technology. Using a multi-stage process, he and his workers transferred colored images from Havell's original copper-engraved plates onto six or more lithographic stones. Then, to fully bring out the wonderful colors and textures of Audubon's majesterial plates, Bien employed skilled finishing and touch-up artists to add hand-drawn lithography and coloring to recreate the subtleties of the Havell engravings. The Bien edition was created between 1858 and 1860, just before the Civil War. Initial print-runs were made under the supervision of Julius Bien and John Woodhouse Audubon. When war began, however, production ceased, so that only 150 plates on 105 sheets were actually completed. The edition was undersubscribed, so John Woodhouse Audubon suffered bankruptcy. Thereafter, a few incomplete sets were printed by others. Precisely derived from the enormous "double-elephant" folio plates of the Havell edition which was engraved on handmade, watermarked paper and hand-colored, the chromolithographic plates by Bien were exceptional examples of early large color printing. Indeed, the Bien edition became the largest color plate book published in America. Because the Bien edition of Audubon's Birds of America was never fully completed, it has become the rarest of Audubon folios. Experts estimate that fewer than seventy original folios were completed during the initial printing of the Bien folios. Consider, that In 1976, Waldemar Fries was able to inventory only 49 original bound copies of the Bien edition. Our plate of the impressive "White headed Eagle" is from that initial printing. We removed our eagle from a matted, glazed, and framed piece that had once hung in a distinguished Southern estate. We had it professionally conserved; then properly rematted with acid-free highest quality stock. We recommend that purchaser's have the piece framed and glazed (ideally with Museum grade UV-protected glass) on their end to conform to their needs. By not shipping a glazed and framed piece, the integrity of such a fine, large print is also better ensured. At some point before it was framed, our "Bald Eagle" was disbound from a bound set thus leaving 13 thread-holes along the plate's upper margin. These don't affect the wonderful chromolithographic image; nor do they show because the plate has been properly matted. There are also a few minor smudges in the plate margins--and some old fingerprint stains on the edges of the blank verso--which do not detract from the bright lithograph with its subtle brown-black-green-yellow coloration and sharp registration. Compare our fine copy with others selling for upwards of $18,000. (Inventory #: 238)
$11,500.00 add to cart or Buy Direct from
Borg Antiquarian
Share this item