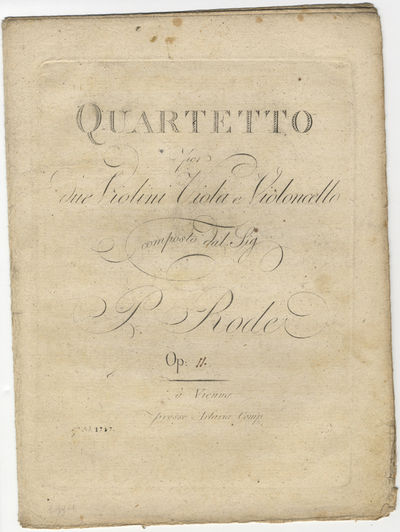 A later edition. Weinmann: Artaria, p. 97. WorldCat (2 copies, at the British Library and the Bayerische Staatsbibliothek (a later issue). The publisher's numbers 1723 and 1757 refer to earlier quartets by Rode, published by Artaria in 1805 as opp. 12 and 13 (date of op. 13 not certain). See Weinmann, op. cit, pp. 84 and 86. The same title page was used throughout, with the opus number added in manuscript. The present quartet is not to be confused with the F-major quartet published under the same opus number by Hoffmeister & Kühnel (item 25904 in this catalogue).

Together with:
RODE
Contemporary scribal manuscript of Violino I part for second movement, [Poco] Adagio, highly embellished. Oblong small folio (323 x 233 mm). Single leaf notated in brown ink on 16 rastrum-drawn staves. Partial watermark to upper left corner. Incipit (one measure and pickup) of first movement, Violino I part only, to first staff, with ascription "Rode" and caption title "Quartetto." Second movement part extends from staves 2 to 9. One correction plus an additional 3 measures in the same hand. "[French] violinist and composer... Rode had a short but brilliant career. As one of the great virtuosos of his time he... was celebrated in all European capitals (except London)... Rode's compositions are almost exclusively devoted to his instrument... As Rode was closely attached to the string quartets of Haydn and Mozart as a... performer, he also practiced the genre as a composer and wrote attractive works, which, however, are clearly in the French tradition of the Quatuor brillant, as the first violin dominates and the other strings only accompany." Manuela Jahrmärker in MGG2. (Inventory #: 25906)
$182.00 add to cart or Buy Direct from
J. & J. Lubrano Music Antiquarians
Share this item