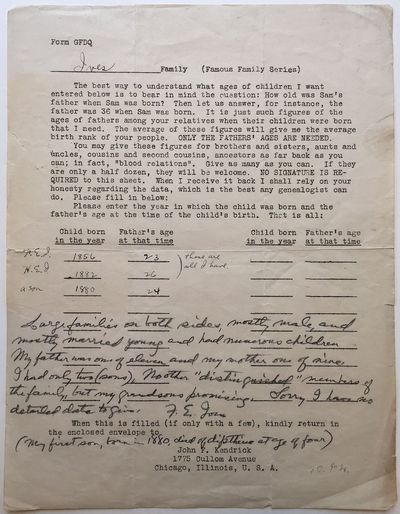 by IVES, Frederic Eugene (1856 - 1937)
Chicago, 1925. unbound. Ives snubs his Nobel-nominated son Herbert!" Outstanding and exceedingly rare document, 1 page, 11 x 8.5 inches, Chicago, Illinois, no date, circa 1925 -- a questionnaire sent out by Funk & Wagnall's to notable Americans for inclusion in their Famous Family Series. Ives provides relevant information pertaining to his parents and children, in part: "...Large families on both sides, mostly male, and mostly married young and had numerous children. My father was one of eleven and my mother, one of nine. I had only two sons F.E.I. (Frederic Edgar Ives) born in 1856 and H.E.I. (Herbert Eugene Ives) born in 1882. No other 'distinguished' member of my family, but my grandson is promising. Sorry, I have no more detailed data to give you..." At the time this questionnaire was completed Herbert E. Ives had already won the Edward Longstreth Medal for Accomplishments in Science in 1907, 1915, and again in 1919. He had already successfully invented and transmitted the first color facsimile. Within three years he would lead a team of more than 200 scientists and engineers at the famed Bell Laboratories and create the first Color Television System. But like his autobiography states: "No matter what I did or accomplished - it was never good enough for my father." Letters and written material in the hand of Frederick Eugene Ives rarely come to market as he was a notoriously bad correspondent. All of his papers are currently in the possession of the Library of Congress. Small chips, creases, and tears around the edges; very good(-) condition. American-born inventor and father of color photography, first demonstrated at the Exposition of the Franklin Institute in Philadelphia in 1885. Originally called "chrome-scope," the quality of the color was highly praised but was not a commercial success due to its prohibitive costs. In 1903 Ives invented the Parallax Stereogram, the first "no glasses" auto-stereoscopic 3-D images. His son Herbert E. Ives (1882 - 1953), a Nobel Prize nominee for his development of the Color Television System and the inventor of the Color Fax, improved on his father's invention by creating Lenticular 3-D images, of the type used today on 3-D postcards, trading cards, and similar novelties, assuring a huge increase of the family fortune. (Inventory #: 265912)
$1,200.00 add to cart or Buy Direct from
Argosy Book Store
Share this item