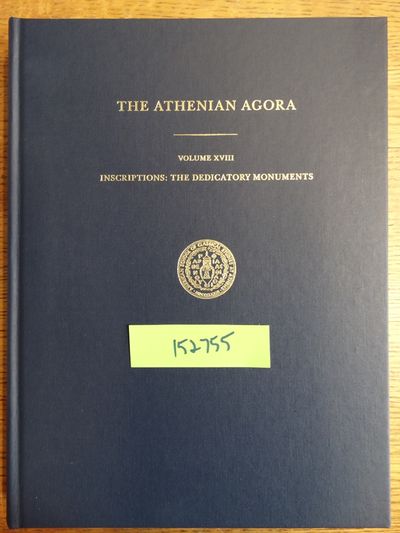 by Geagan, Daniel J.
Princeton, New Jersey: The American School of Classical Studies at Athens, 2011. Hardcover. VG (ex-art library with bookplate, pocket, and few marks; otherwise quite crisp and clean.). Navy cloth, gilt letters on spine & front cover, gilt decoration on front cover, 425 pp. plus 80 BW plate pages at rear. Results of excavations conducted by The American School of Classical Studies at Athens. "The final of five projected volumes encompassing the inscriptions discovered in the Athenian Agora during the directorships of T. L. Shear Sr. and H. A. Thompson (1931-1968; through invntory no. I7047). Agora XV and Agora XVII appeared in 1974, Agora XIX in 1991, and Agora XVI in 1997. The monuments were identified and studied during extended visits to Athens in 1970, 1976, 1980, and 1986 and shorter visits in 1997 and 1999, first through a stone by stone search of a significant portion of the epigraphical collection in the basement of the Stoa of Attalos, and then from scrutiny of the publications of Agora inscriptions and excavation records." (preface). (Inventory #: 152755)
$100.00 add to cart or Buy Direct from Mullen Books
Share this item