Charming group of hand-made and painted folk art origami figures, including fourteen soldiers, three horses, a flag on a staff, and two incomplete figures (a horse and a soldier) 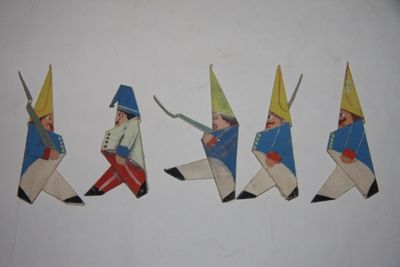 NA
NA. Very Good. N.d., early twentieth century (1910 to early 1930s), based, among other things, on box housing the grouping with stamp of George V, which dates from 1914. (We assume the box housed the grouping from the time it was created, more or less.) The figures are quite precisely painted, and appealingly resemble nutcracker soldiers and what we would imagine would be their toy mounts. Testament to the attention to detail is that the mane on one of the horses is very precisely cut into separate fine strands! The paint colors on the soldiers are bright and eye-catching blues and reds, with some green, yellow and quite realistic flesh colors, while the horses are bay, piebald and chestnut-ish. Most of the soldiers have bayonets or muskets, and they are all postured as if on a ceremonial march. Although origami, the figures are essentially two dimensional, but an example of the care rendered is that they are all painted on both sides. The unfinished figures are a plus to have as well, as they easily reveal the process by which the figures were made. We don't know who made the figures, although their are initials on the two unfinished ones, and we would guess that whoever made them was from the Bristol area of England, based again on the box housing them. Our conjecture was that a young adult made the figures, but certainly it had to be someone with the skill beyond the ability of a pre-teen. The soldiers are generallly 8 cm tall, the horses, the same, and the horses are about 10 cm long at their longest. Some of the firearms are bent, and there is other trivial soiling. (Inventory #: 004666)
$600.00 add to cart Available from
White Fox Rare Books & Antiques
Share this item
White Fox Rare Books and Antiques
Offered by