Selection of Poetry from Various Authors 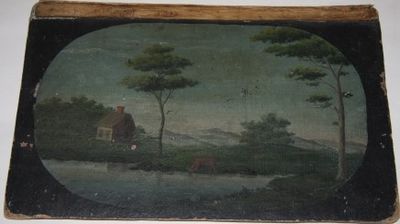 by Bartlett, Joseph
1821. Hardcover. Leather spine.. Good. A manuscript notebook with lovely original folk art oil paintings on both boards and two watercolors within! 4to. 30.5 by 19.5 cm. Unpaginated, 18 leaves of wove paper with content, followed by a few blanks. Watercolored title page with American eagle atop an orb and pedestal, and a beautiful painting of ships bearing the American flag near a lighthouse perched on a rocky spit and a cape house beyond. The paintings on the boards are what strike us as the most unusual though, especially because the medium is oils. One is of a windmill and a pastoral setting, the other, a cow drinking at a pond. Also a faint pencil sketch on the final leaf, possibly a draft of one of the two cover paintings, and elsewhere a tail vignette of a tombstone. The verse is not credited. The longest selection is "An abbreviation of the Shipwreck", which is in fact an abridged version of Falconer's narrative poem. Another, "Epitaph on a Blacksmith", was written by Alexander Pennecuik. A poem entitled "Water" was penned by an Ann Taylor. We thus assume, based on the title, that most of the poetry was transcribed. The sea is the most common subject, but by no means the exclusive one. The alum-tawed leather of the spine is heavily soiled. Repair of the sewing which binds the text block. Rubbing and minor loss on the cover panels. Darkening of the cover paintings. (Inventory #: 004672)
$2,000.00 add to cart Available from
White Fox Rare Books & Antiques
Share this item
White Fox Rare Books and Antiques
Offered by


(click for more details about [Trade Catalogue] Campaign Equipments, Manufactured by The Domestic M'f'g. Co., Wallingford, Conn. Catalogue No. 114)
View all from this seller>