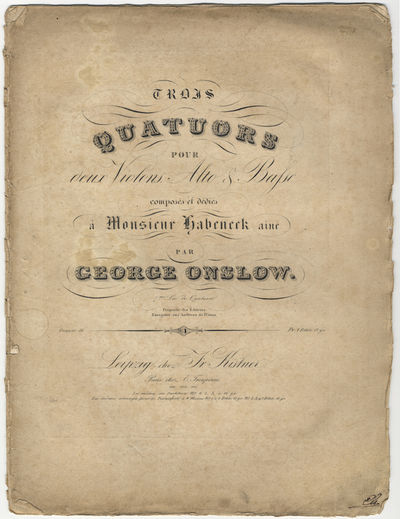 A partially uncut copy. An early edition, published within months of the first; early issue but not the first, which was published ca. 1834. WorldCat (6 copies in the U.S.). First issue lacks advertisement of full score and piano duet version.

"[A] French composer of English descent... Onslow's string quartets and quintets are the pinnacle of his output. His youthful quartets (opp.4, 8, 9, and 10) are notable for great flexibility of writing, exceptional rhythmic and melodic charm, and great vitality... In 1832 he returned to the form with new and sudden vigour probably as a result of his discovery of Beethoven's late quartets. Both shocked and fascinated by these, he composed the 12 most important of all his quartets (opp.46 to 56) over a period of two years. Of greater density, and with even greater interplay between the voices, these works show great emotional intensity, opening up the way to new harmonic and rhythmic daring, and contain movements of striking beauty. Onslow's work was particularly successful in Germany and Austria throughout the first half of the 19th century, as the many editions of his works show." Viviane Niaux in Grove Music Online. (Inventory #: 25811)
$110.00 add to cart or Buy Direct from
J. & J. Lubrano Music Antiquarians
Share this item