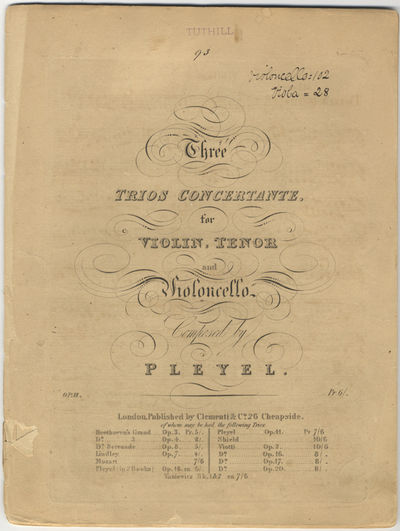 Handstamp, "Tuthill," to head of all three title pages. Secondary pagination in ink; some fingerings, notational corrections, and other annotations in pencil.

Browned and fragile; most leaves detached and frayed at edges and spine, with loss to blank areas. An unrecorded edition. Neither Benton nor RISM list any editions with the titling "Three Trios Concertante" or billing the viola as "tenor." The edition by Longman, Clementi & Co. (Benton 4020; RISM P3510) has a different title. Dated according to Humphries-Smith p. 107. The three works were first published in 1787.

G. A. Tuthill was listed as a violist at the 7th Regiment Glee Club in 1886. It is not known whether he was related to William Burnet Tuthill (1855-1929), the architect of Carnegie Hall.

"The enormous popularity of Pleyel's music during his lifetime is reflected in the testimony of contemporary journals and of early writers like Gerber and Fétis. The small town of Nantucket, Massachusetts, then still a whaling port, formed a Pleyel Society in 1822 'to chasten the taste of auditors', according to a newspaper announcement. The most telling evidence of the appeal of his music lies in the thousands of manuscript copies that filled the shelves of archives, libraries, churches, castles and private homes and in the thousands of editions produced in Europe and North America. In quality the works vary greatly, although most show considerable facility and a thorough technical grounding. The earlier works in particular display thematic originality and ingenious developments that make them fresh and attractive. After about 1792 his talent seems to have diminished; his inventiveness waned and he occasionally succumbed to routine procedures." Rita Benton in Grove Music Online. (Inventory #: 25844)
$58.00 add to cart or Buy Direct from
J & J Lubrano Music Antiquarians
Share this item