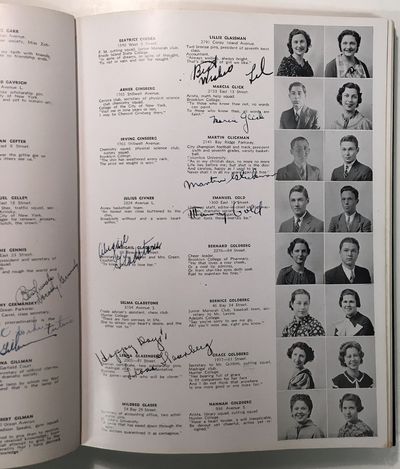 by GLICKMAN, Martin "Marty" (1917 - 2001)
New York, 1935. hardcover. very good(+). Yearbook for the James Madison High School Senior Class, Volume XIX, boldly signed in fountain pen on page 26 next to his image and short bio. He is described as "City champion football and track star. However, knowing he was graduating and knowing he was training for the 1936 Berlin Olympics, the school dedicated three-quarters of page 114 to heralding his accomplishments, in small part: "...Marty is the greatest runner ever to put shoes on...He holds the P.S.A.L. City indoors and outdoors for the 100 yard dash for the last three years. Marty's fastest time for the century is 0:09.75. He was clocked at this remarkable time at the Troy Interscholastic Games. Also, in 1934, he was the fastest and shiftiest quarterback in the city." This item is boldly signed and in very good(+) condition. Pioneering Hall-of-Fame radio announcer known particularly for his broadcasts of New York Knicks basketball games and the football games of the New York Giants and the New York Jets. He was a noted high school track star at James Madison High School in New York City, graduating in 1935 and immediately earning a place on the U.S. team at the 1936 Summer Olympic Games held in Berlin, Germany. The unexplained, last-minute decision to remove him and another Jewish athlete from a relay event at the 1936 Olympics has been widely viewed as an effort to avoid embarrassing Adolph Hitler, especially after the success of Jessie Owens. (Inventory #: 265949)
$350.00 add to cart or Buy Direct from
Argosy Book Store
Share this item

At Home With Books: How Booklovers Live with and Care for Their Libraries

New York : Carol Southern Books , 1995
(click for more details about At Home With Books: How Booklovers Live with and Care for Their Libraries)

Winona Lake : Eisenbrauns , 1990
(click for more details about Cadmean Letters: The Transmission of the Alphabet to the Aegean and Further West before 1400 B.C.)
View all from this seller>