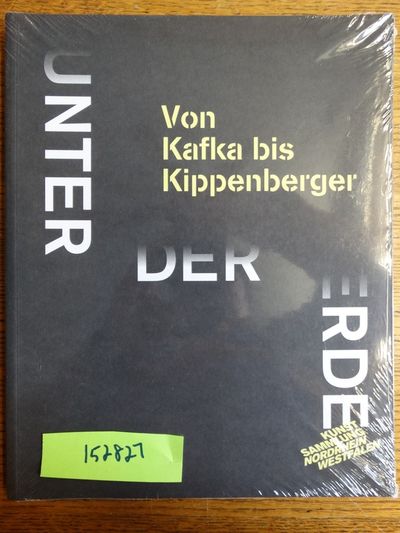 Düsseldorf, Germany: Kunstsammlung Nordrhein-Westfalen, 2014. Softcover. As New. Black wraps, 159 pp., color & BW illus. Text is in German. Issued in conjunction with a 2014 exhibition focusing on underground art -- literally. Held at Kunstsammlung Nordrhein-Westfalen, Düsseldorf, April 5-August 10, 2014. Includes work by Henry Moore, Bruce Nauman, Peter Fischli, David Weiss, Gregor Schneider, and more. A rough translation of a German review follows: "Inspired by the literature, the experiences of the two World Wars or in confrontation with real caves, tombs, caves and tunnels edit visual artists in the 20th and 21st centuries and strengthened in many ways the motive of relocation of the habitat under the earth. Henry Moore sketched during the Blitz of 1941, the investigation into the underground shafts protection Londoners, Bruce Nauman buries in the 1970s, a concrete chamber, the interior of which is accessible through a camera, Peter Fischli & David Weiss stage in their channel video documentary imagery from the Zurich sewer and Gregor Schneider builds oppressive, soundproofed rooms. The book contains 14 positions two of modernity and twelve contemporary art. The different interpretations of artists make the ground represents a specific place or notional idea and refer to its utopian respectively anti-utopian character. Direct and indirect references to literary images of the subsurface to be clearly explained in the accompanying text. Interviews with selected artists provide insight into the motivic backgrounds" (Inventory #: 152827)
$30.00 add to cart or Buy Direct from Mullen Books
Share this item