Manual of the Corporation of the City of New York, for 1856 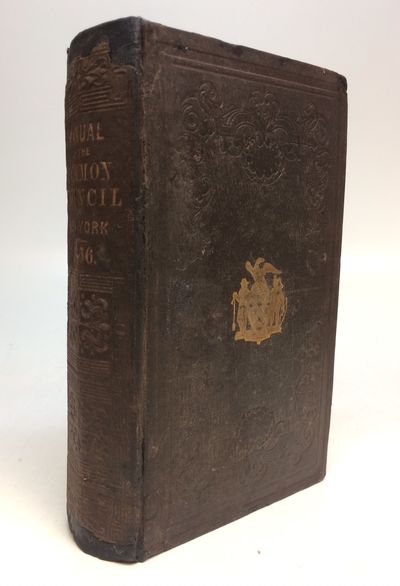 by VALENTINE, D. T. (David Thomas)
New York: McSpedon & Baker, 1856. hardcover. Illustrated manual of the Corporation of the City of New York. 600 pp. with 5 fold out maps and 32 diagrams and lithographed views, some hand colored. Brown bukram with gold stamped spine and covers. 12mo. Spine repaired. Illustrations, maps and text overall very good. Maps and illustrations complete according to the "Index to the Illustrations in the Manuals of the Corporation of the City of New York", published by the Society of Iconophiles. Inscribed and signed by Valentine. The "Manuals of the Corporation" were directories of extensive historical and contemporary records of New York compiled by D.T. Valentine. These books include detailed information on the meetings of the Aldermen Council, ordinances passed, public officials, the city's debts, directories of hospitals, alms houses and schools, ferry schedules, lists of public porters, demographics and census information, and descriptions of historic buildings and streets. Much of the information was gleaned from Dutch and English sources, as processed by Valentine. Notable illustrations in this edition include Old City Hall, Fort Greene, Mill Rock & Hell Gate, and views of the Harlem Plains. Maps include the City of New York (1856), Plan of the City of New York showing the made and swamp Land, Plan of the City of New York (by Goerck and Mangin, 1803), Map of Harlem Heights and Plain (1814) and Part of New-York in 1742 shewing the site of the present Park (by David Grim). D.T. Valentine (1801-1869) served as the Deputy to the Clerk of the Common Council for thirty-seven years without being promoted to Clerk. Valentine took it upon himself to compile the "Manuals", which he updated and published annually from 1841-1866. Many copies were personalized for prominent officials. This compendium is an excellent source of early New York City history. (Inventory #: 266013)
$750.00 add to cart or Buy Direct from
Argosy Book Store
Share this item

Sportsmen's Fishing Map of the United States and Neighboring Waters

Miami : National Trading, Inc , 1971
(click for more details about The West Indies)
View all from this seller>