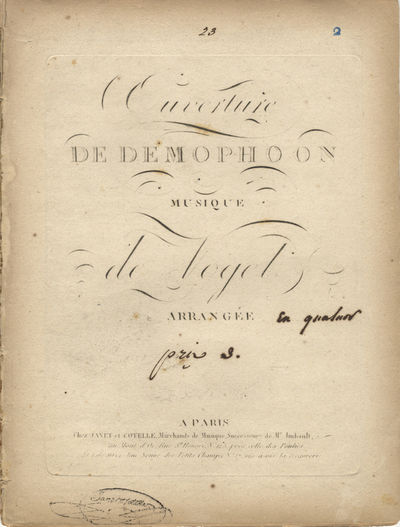 Publisher's handstamp to foot of title. The unusual pagination of the Alto and Basso parts suggests that they were printed on the same bifolium and then separated.

"En quatuor" and price added in black ink; secondary pagination in ink to head to all pages except blanks.

Some browning, bleeding and offsetting; Volino secondo part somewhat foxed. Not in RISM, WorldCat, or KVK. The imprint suggests that the edition is a reprint/Titelauflage of Imbault's (cf. RISM V2272, for string quartet with oboes and horns ad libitum); Janet & Cotelle bought Imbault's business in 1812. Imbault assigned the same plate number (112), combined with varying letters, to all of his arrangements of the opera (see RISM VV2277a for two clarinets, two horns, and two bassoons, VV 2289a for two clarinets, and V2299 [with a suggested date of 1795] for piano); "Q" most probably stands for "quatuor."

The title of the present edition is generic, to be used for all possible arrangements of this overture; the identity of the arranger is unknown.

"Around 1786 Vogel began composing his second opera, Démophon. Its posthumous première (at the Opéra on 22 September 1789) was given only after the première of Cherubini's opera on the same subject... The overture, composed in monothematic sonata form, remained popular into the early 19th century, and was incorporated into Gardel's ballet-pantomime Psyché (1790), which had more than 1000 performances at the Opéra between its première and 1829." Arnold Jacobshagen in Grove Music Online. (Inventory #: 26015)
$94.00 add to cart or Buy Direct from
J. & J. Lubrano Music Antiquarians
Share this item