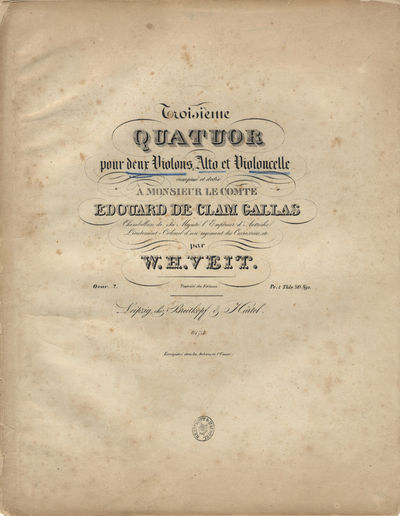 "[Veit was a] Czech composer. At ten years old he was already an accomplished player on the piano, organ and violin, and had begun to write church music... In 1831 he rejected music as a profession, entering the service of the state legislature. However, after the public première of his First String Quintet (1835), he was also recognized as a leading Prague composer... As one of the first Czech composers who enthusiastically embraced the aesthetic and stylistic ideals of the German Romantics, Veit occupied an important position in the development of Czech music. Although heavily influenced by Mendelssohn and Schumann, his most effective works are characterized by an individual and expressive melodic gift, strong rhythmic sense and a penchant for unexpected turns of harmony and tonality. He pioneered the 19th-century Czech development of chamber music (his quartets were popular in Prague concerts and soirées, and were familiar to Smetana)." Karl Stapleton in Grove Music Online. (Inventory #: 26025)
$115.00 add to cart or Buy Direct from
J & J Lubrano Music Antiquarians
Share this item