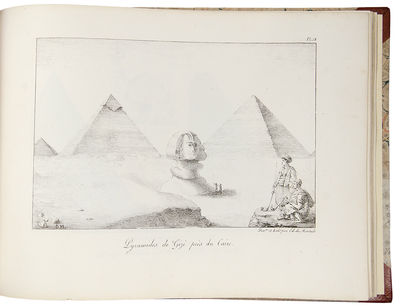 The atlas to Montule's travels in America: a significant and early visual tour of the United States.

The very rare atlas to Montule's Voyage depicts his travels in North America and the Caribbean, and also in Italy, and Egypt in the late 1810s. The atlas contains many American views, and though it was intended to accompany the author's text, it was also issued separately and is not often found with the text volumes. The wonderful lithographic plates depict scenes from Montule's travels in North America, and were made from the author's own drawings. This atlas is not mentioned by Monaghan, Sabin gives the wrong number of plates, and Clark describes it as one of Montule's "other" works, adding that it is "now quite rare." The attractive plates depict New York harbor, the mastodon skeleton at the Philadelphia museum, "Encounter with a Rattle Snake" near the Ohio River, the port of St. Domingo, Niagara Falls, and a view of St. Thomas. Other plates include a view of the Philadelphia hospital, Quaker costumes, "Costume des Negresses de St. Thomas," a country estate in Kingston (Jamaica), a church in New Orleans, "Sauvages du Mississippi," and several other views, mostly of Italian and North African scenery. The folding map shows the United States, including the Missouri and Northwest territories, as well as parts of the Caribbean.