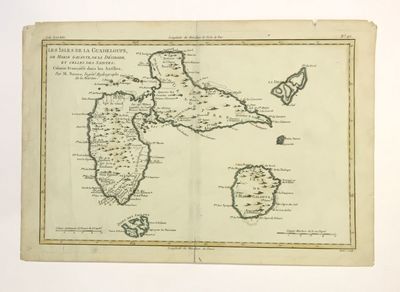 by BONNE, Rigobert
Paris: Rigobert Bonne. unbound. Map. Engraving with original outline coloring. Image measures 9.5 x 12.75". This map of the Guadeloupe Islands in the French West Indies is by one of the most significant French cartographers of the 18th century. After first reaching them in 1493, Christopher Columbus named the islands after the Virgin Mary, yet with their oft-remarked butterfly-like shape, they might have been better named for an angel. Bonne has elegantly rendered the shape and detail of the coastlines, including both the two main islands and surrounding locales.This map, published in Bonne's 1780 atlas, conveys the rational cartographic style of the day in its lack of title cartouche, rhumb lines, or any other decorative elements. Only pictorial mountains remain and serve to describe the mountainous terrain of the volcanic islands. Nearby, fine engraving shows the plateaued landscape of La Desirade. The map is in good condition with some chips and tears to margins, not affecting the image. Center fold as issued in atlas. Map is in good condition with minor edge wear and some wear along original centerfold. Split at top and bottom of centerfold, not affecting image. Minor spotting with press mark visible. Rigobert Bonne (1727-1795) was one of the most important cartographers of the late 18th century. He served as Hydrographer to France, and during his term, he produced a number of detailed and useful maps, particularly of coastal regions. His work is often devoid of decorative cartouches and compasses roses and marks a turn in European mapmaking away from decoration toward technical mapping. One of the most recognizable maps of the region from that period. (Inventory #: 265691)
$175.00 add to cart or Buy Direct from
Argosy Book Store
Share this item