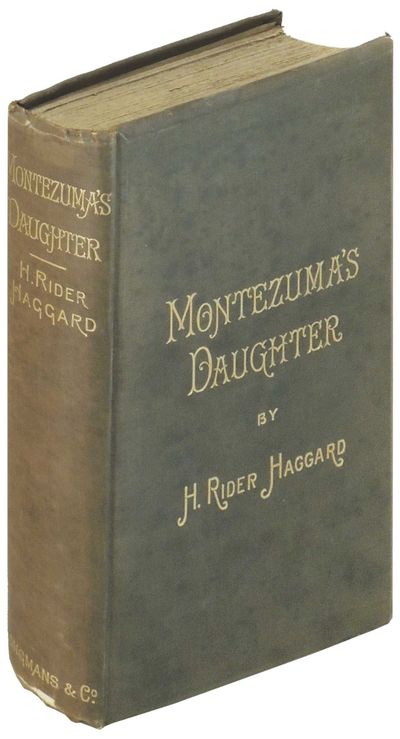 by Haggard, H. Rider; Illustrated by Maurice Greiffenhagen
London: Longmans, Green, and Co, 1893. Hardcover. Very Good. Maurice Greiffenhagen. Maurice Greiffenhagen. Hardcover. First Edition of this Aztec romance. Author's Presentation Copy, inscribed "To Andrew from his affec brother H Rider Haggard 1894." Henry Rider Haggard (1856-1925) was the author of a number of adventure novels set in exotic locales. His books, including She and King Solomon's Mines, are still popular today. Haggard traveled to Mexico in 1891 to do research for this book and sadly his young son died while he was away. The book describes the first interactions between the Spanish and South American natives, as well as murders, shipwrecks, and slavery. Colonel Andrew Haggard, who had a distinguished military career - he was one of he first British officers to command in the Egyptian army - was also a successful novelist, travel writer and poet. It is known that Andrew helped Rider with the writing of Dawn and he likely played an important role in helping his younger brother with the several bestsellers which revolved around Egypt and mummies. There are 25 black and white illustrations by the British painter and illustrator Maurice Greiffenhagen. He was Haggard's friend, which led him to illustrate several of his adventure books, starting with She in 1889. Bound in the original publisher's blue-green cloth with gilt author and title to front cover and spine. Light bumping, small chip to bottom of faded spine. Hinges a bit tender but text block is tight. Interior pages are clean. Bookplate of collector Mark Samuels Lasner to front pastedown. Very good condition. 325 pages plus 24 page publisher's catalog. LIT/012016. (Inventory #: 28937)
$2,400.00 add to cart or Buy Direct from
Kelmscott Bookshop
Share this item