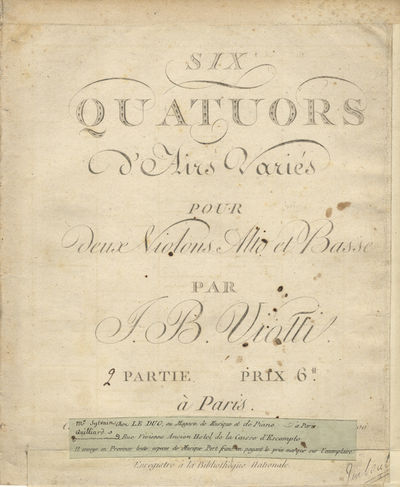 The present volume ("deuxième partie") contains the fourth, fifth, and sixth of the six quartets, numbered I, II, and III. The melodies on which the composition is based are identified in engraved caption titles.

With overpaste of Le Duc, Paris, with early manuscript addition, "Mr. Sylvain Quilliard."). Number [2] before "Partie," indicating the second volume of the publication, added in ink to Violino 1o part only.

Minor soiling and offsetting; closely trimmed, with slight loss to pagination and publisher's handstamp; catalogue pages folded in at foot; small ink stains to title of Violino 1o part; repair to first two leaves of Violino 1o part and title leaf of Alto part. [?]First Edition, later issue. White IId:4-6. Giazotto 115-117. Devriès-Lesure I, p. 85. RISM V1893 (3 copies listed).
The first page of the catalogue is identical with Devriès-Lesure, facsimile no. 107; the second has the same header ("3e Suite...") and layout as facsimile no. 110 but represents a slightly earlier version as the most recent entries from the facsimile are lacking. First published in 1796.

The music of this edition is mostly spurious. The British Library holds a copy of André's edition of the same music with autograph notes by Viotti-to vol. 1: "I have never composed these quartets;" to no. 2: "These are not by me either except the two polonaises." See RISM V1891 and BUC p. 1045. The "polonaises" are the final movements of the present "Quartetto I" in B-flat major and "Quartetto III" in A major. According to the caption titles, the former is on the "Aria delle nozze di Dorina," the latter on the "Aria in cosa rara." It is not known who composed (or rather, arranged) the remaining music. (Inventory #: 26037)
$220.00 add to cart or Buy Direct from
J. & J. Lubrano Music Antiquarians
Share this item