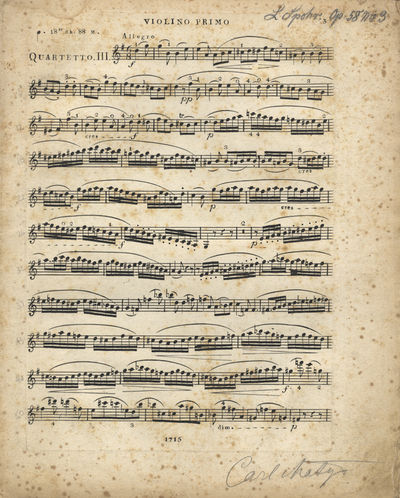 "The largest portion of Spohr's chamber music was for strings alone, ranging from 19 unsurpassed duos for two violins to four masterly, and largely unemulated, double string quartets. These, together with the 36 string quartets (and several other works for the same combination), seven string quintets and the String Sextet of 1848, display a number of common features. Spohr's own mastery of the violin is evident in all of them, and their technical difficulties, together with the particular style of performance necessary to secure their full effect, may partly explain their infrequent performance. The quartets, especially, fall into two distinct categories: solo quartets in the tradition of Rode (often entitled Quatuor brillant), which are essentially violin concertos with string trio accompaniment, and true quartets where the interest is more evenly divided between the instruments." Clive Brown in Grove Music Online. (Inventory #: 25965)
$132.00 add to cart or Buy Direct from
J. & J. Lubrano Music Antiquarians
Share this item