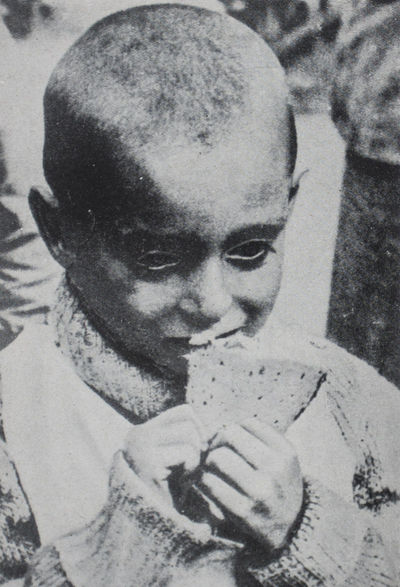 by Apfelbaum, Emil (Ed.); David Guzik; Prof. Dr. Julius Zweibaum; Dr. Marek Koenigstein; Jonas Turkov; Dr. Josef Sack; Dr. Leon Plockier (Contributions by)
Varsovie: American Joint Distribution Committee, 1946. First edition. Softcover. fair to g+. Quarto. 264pp. Original printed wrappers. Typed note introducing the work and dated November 1948 pasted to front free endpaper. The deliberate use of famine was an integral part of Nazi plans and policies regarding Eastern Europe during World War II as attested in the following three key examples: First, the so-called General Plan for the East (Generalplan Ost; hereafter GPO); second, the "hunger strategy" carried out by the Germans in the occupied regions of the Soviet Union following the invasion of June 1941, which included the starvation of Soviet POWs and Soviet civilians; and third, the Nazi ghettoization policies from 1940 to 1942 which created famine conditions in which hundreds of thousands of Jews died of hunger and hunger-related diseases. The present volume examines an important part of the third and final example of Nazi use of famine by the ghettoization policies. This printed report contains the research on the effects of starvation on children and adults that was conducted by several Jewish physicians employed in the Berson and Bauman Jewish Children's Hospital on Sliska Street in Warsaw, a hospital located in the small ghetto between 1940 and 1942. It takes the form of a series of articles by individual doctors who conducted their research independently. The report, which includes photographs and testimonies, was smuggled out of the ghetto in 1942 or 1943. All of the participating physicians, with the exception of the editor Professor Emil Apfelbaum, perished during the war*. Illustrated with 11 b/w photographic plates and numerous charts, this work provides clear evidence that famine was a central component of Nazi plans for occupied Eastern Europe and the Soviet Union. The hunger strategy implemented in conjunction with 'Operation Barbarossa', as well as the inhumane conditions created in the ghettos of Eastern Europe, had catastrophic consequences for the Slavic and Jewish populations of the region. Raul Hilberg** has estimated that over half a million Polish Jews died in the ghettos. Approximately 7.5 million non-Jewish Ukrainian, White Russian and Polish civilians died as result of German occupation. In addition, some 3.3 million Soviet POWs perished through hunger, disease or shooting at the hands of the Germans on the Eastern front over the course of the war. These horrific figures underscore the magnitude of the death and suffering produced by the calculated starvation strategies applied by the Nazi regime. Along with numerous other methods of death and destruction, the deliberate use of famine must be rated as one of the favored Nazi means of exterminating the regime's racial and ideological enemies. True first edition (simultaneously with the Polish). Wrappers age-toned, with spine and covers partly chipped. Pages evenly age-toned throughout. Text in French. Wrappers in overall poor to fair, interior in good+ condition. (Inventory #: 40292)
$950.00 add to cart or Buy Direct from
Eric Chaim Kline Bookseller
Share this item