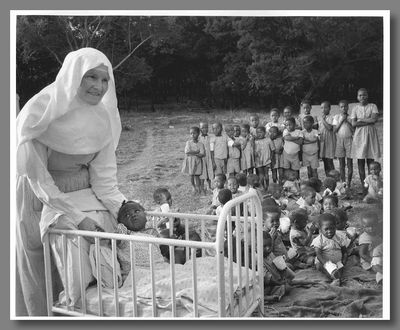 by Karsh, Yousuf
[Np: The Photographer, 1963. Two original glossy double-weight gelatin silver prints from negatives, 11 x 14" (inclusive of margins). Captioned in pencil on verso. About fine. Original prints of two photographs taken by Yousuf Karsh on location in South Africa attendant to the filming of the 1964 Diamond Films production, ZULU, directed by Cy Endfield. Karsh's invitation to join the production and photograph the cast and locale resulted in a sequence of photographs of a very high order, and his interest in the Zulu people lead to additional photographs not directly associated with the film, such as these. The present images are two variants of the same situation, a large gathering of Zulu children, some seated, some standing, with a Caucasian nun, in habit, caring for one of the youngest of the children. The images are denoted numbers 317 and 410 in the sequence, and are captioned in pencil: "At a missionary hospital in Zululand" and "Time for milk at a missionary hospital in Zululand." Although this project is not as widely known as Karsh's formal portraiture, examples of the resulting images have featured prominently in both museum and print retrospectives of his career. (Inventory #: WRCLIT75487)
$600.00 add to cart or Buy Direct from
William Reese Co. - Literature
Share this item