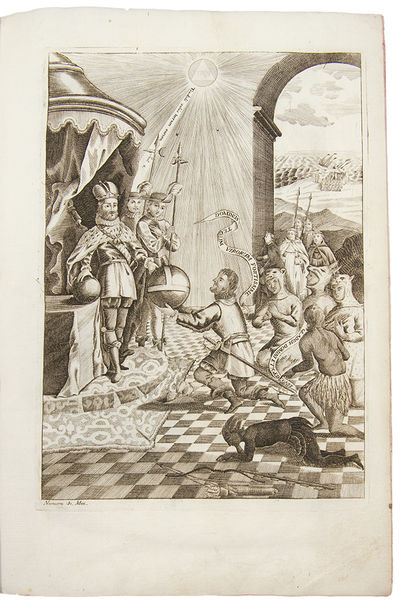 First edition of this "important and highly esteemed work" (Sabin), containing the celebrated letters of Cortez to the Emperor Charles V, illustrated with important engravings and two influential maps: a cornerstone on the Spanish colonial conquest of Mexico and the early exploration of southern California.

Father Lorenzana, the Archbishop of Mexico from 1766 to 1772, here publishes three of Hernando Cortés' letters to Emperor Charles V, with numerous annotations which provide reliable information on the early civilization of Mexico and its conquest. Besides the allegorical frontispiece showing Cortes presenting the world to the Emperor, the plates include a depiction of the Mexican calendar, a folding view of the great temple of Mexico, and 31 plates depicting an Aztec codex representing the tributes paid by the different towns in Mexico. The maps include a general map of Mexico showing Cortes' route, by José Antonio de Alzate y Ramírez; the second map is an important depiction of the northern Pacific coast of Mexico, the Baja peninsula and southern California, after Domingo del Castillo, being the first map to establish definitively that California was in fact a peninsula and not an island. "Pages 322-328 contain an account of the voyage of Cortes to the peninsula of California and notices of later expeditions to 1769. The map of Castillo was inserted to illustrate this account, which Lorenzana states was copied from the original in the Archives of the Marquesado, that is, of the Cortes family. Since that time the original has never appeared, so we are still at a loss to know whether Castillo or Lorenzana put the name 'California' on the map" (Wagner).