An Authentic Narrative Of The Proceedings Of His Majesty's Squadron Under The Command Of Rear Admiral Sir Horatio Nelson, From Its Sailing From Gibraltar To The Conclusion Of The Glorious Battle Of The Nile; Drawn Up From The Minutes Of An Officer Of Rank In The Squadron 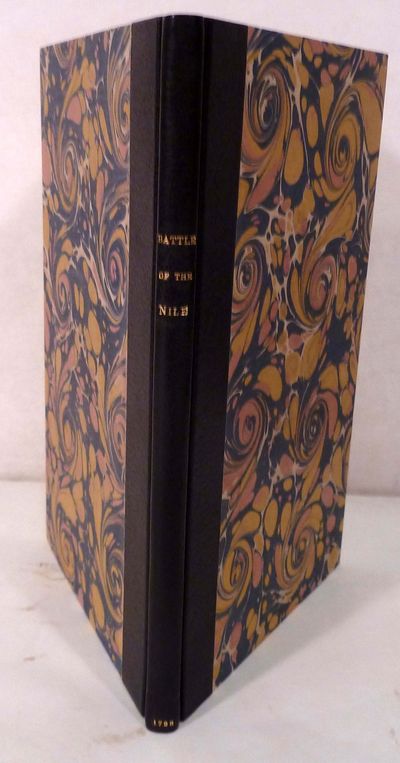 by [Berry, Edward]
London: Printed For T. Cadell, Jun, and W. Davies, 1798. Second edition. Hardcover. Modern quarter morocco and marbled boards. Fine. 56 pages. 21 x 13 cm. With folding copper-engraved plan of the Battle of the Nile, also called the Battle of Abu Quir, one of Nelson's greatest victories, restoring the British presence in the Mediterranean and dooming Napoleon's venture in Egypt. Sir Edward Berry, 1768-1831, was captain of the flagship during the battle, and when Nelson was wounded, prevented him from falling by catching him in his arms. Berry afterwards published the above work anonymously. Berry is said to have been the only officer in the navy, of his time, except vice-admiral Collingwood, who had three medals, having commanded a ship in three general actions -- the Nile, Trafalgar, and St. Domingo. The DNB calls this work, "a pamphlet which under the special circumstances of its authorship, is of singular interest and value." Clean, fresh copy with plan in excellent condition. (Inventory #: 20808)
$1,320.00 add to cart or Buy Direct from
Roy Young Bookseller
Share this item
Roy Young Bookseller, Inc.
Offered by

Plutarch's Lives Translated from the Greek, By Several Hands To which is prefixt The Life of Plutarch

London : Jacob Tonson , 1703
(click for more details about Plutarch's Lives Translated from the Greek, By Several Hands To which is prefixt The Life of Plutarch)
View all from this seller>