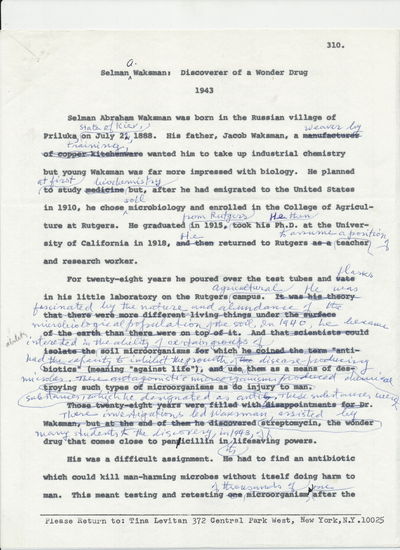 by WAKSMAN, SELMAN
Selman Waksman: Discoverer of a Wonder Drug 1943," is the title of the typed document containing the draft of biographical information which he generously corrected. The draft was for the book, "The Laureates: Jewish Winners of the Nobel Prize," (Tina Levitan, 1960 First edition). Here he edits the section on his biography as explained in his 1971 letter to Levitan. In the letter he notes that "made a number of important corrections and changes. He also writes, "The first announcement of the work on streptomycin was published early in 1944 in the journal Science...." He encloses a "laboratory photograph of myself...." He signs, "Selman A. Waksman." The article he extensively corrects is titled, "Selman A. Waksman: Discoverer of a Wonder Drug 1943." He adds the "A" after his first name. The earlier TLS, 1966, to Levitan discusses royalties and production of streptomycin in other countries. Waksman and his team of researchers discovered a range of drugs to treat infectious diseases, including Streptomycin and Neomycin. Streptomycin was the first antibiotic to cure tuberculosis. He accomplished his work at Rutgers University where he established an institute for the study of microbiology in 1954. It was renamed for him after his death. (Inventory #: 4207)
$5,600.00 add to cart or Buy Direct from
Schulson Autographs
Share this item