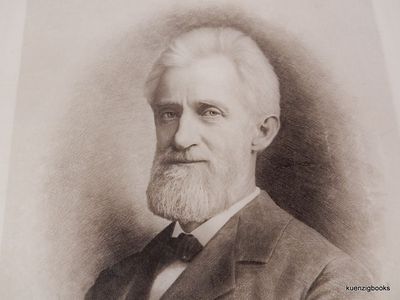 by Shaler, Nathaniel S.
New York: Charles Barmore, 1908. First Edition. Near Fine. First Edition. 13 1/2 x 18 1/4 inches (sheet size). Plate size is 9 3/4 x 13 3/4 inches. An engraving on vellum paper of Nathaniel S. Shaler. Signed in the plate by Shaler. There is also a pencilled signature of Campbell (first name illegible) in the plate margin. A nice strong impression suitable for framing. Charles Barmore published many famous people's portraits both on Japanese Vellum and parchment according to his catalogs. Figures included both American and Foreign dignitaries, royalty, scientists, political figures, and military men. He engaged well known engravers to execute these portraits and sold them by advertisements and his catalogs. We have not been able to determine who Campbell was, but some Barmore portraits are signed by the sitters and/or the artists.

Shaler was an "American geologist: b. Newport, Ky., 20 Feb. 1841; d. Cambridge, Mass., 10 April 1906. He was graduated from the Lawrence Scientific School, Harvard, in 1862, served in the Union army as an artillery officer, and then returned to the Lawrence School, where he was assistant and instructor in geology and zoology He accepted the chair of palæontology at Harvard in 1868, was transferred in 1887 to that of geology, and he was dean of the Lawrence School from 1891. In 1873-80 he was in charge of the Kentucky geological survey, and from 1884 was director of the Atlantic division of the United States geological survey. He was commissioner of agriculture for the State of Massachusetts at different times, was president of the Geological Society of America in 1895; and besides numerous reports for the United States geological survey published ‘Kentucky Geological Reports and Memoirs' (7 vols., 1876-82); ‘The Story of Our Continent' (1892); ‘The Interpretation of Nature' (1893); ‘The United States of America' (2 vols., 1894); ‘The Individual: Study of Life and Death' (1900); ‘The Citizen: A Study of the Individual and the Government' (1904); ‘The Neighbor' (1904); ‘Man and the Earth' (1905). Consult ‘The Autobiography of Nathaniel Southgate Shaler,' with a memoir by his wife (New York 1909), etc." (Encyclopedia Americana). (Inventory #: 25458)
$165.00 add to cart or Buy Direct from Kuenzig Books
Share this item

Singular Beauty: Simple Microscopes from the Giordano collection. Catalogue of an exhibition at the MIT Museum September 1st 2006 to June 30th 2007

[ Southampton, MA ] : The Antiquarian Scientist , 2006
(click for more details about Singular Beauty: Simple Microscopes from the Giordano collection. Catalogue of an exhibition at the MIT Museum September 1st 2006 to June 30th 2007)