Sounds from the Cave in Central Park 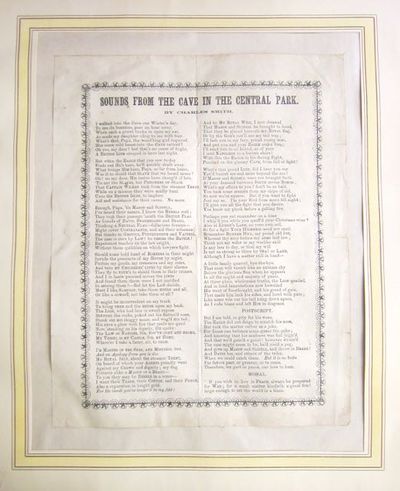 A poem about an encounter with a British lion in New York's Central Park, referencing the American Revolutionary War -- specifically, the Trent Affair. Captain Charles Wilkes is mentioned by name, as are Mason, Slidell, and others, plus other well-known events (such as Bunker Hill). Wilkes (1798-1877) was an American naval officer and explorer. He led the United States Exploring Expedition, 1838-1842 and commanded the ship in the Trent Affair during the American Civil War (1861–1865), where he attacked a Royal Mail Ship, almost leading to war between the U.S. and the UK. The moral of the poem is "If you wish to live in PEACE, always be prepared for War; for a small matter kindleth a great fire! Large enough to set the world ablaze!" Very scarce, none found on OCLC, nor in the holdings of the NY Historical Society. (Inventory #: WB14168)
$650.00 add to cart Available from Sanctuary Books
Share this item

Manuscript map of Deposit and Bennettsville