After Reading: Letters of Oscar Wilde to Robert Ross 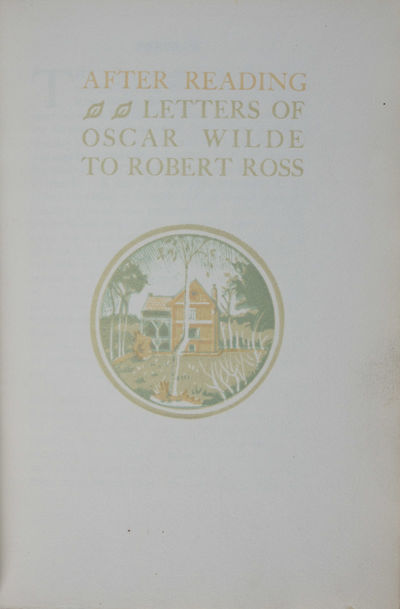 by Wilde, Oscar
Westminster: Beaumont Press, 1921. First edition. Hardcover. g+ to fine. 440/475, Large Octavo. 59 (1)pp. Original gray half cloth over decorative boards with gilt lettering on spine. Illustrated endpapers and title page. 'Letters written by Oscar Wilde during the summer of 1897 after his release from prison to Robert Ross, who had approached Beaumont about publication. After Ross's sudden death in 1918 Vyvyan Holland, Wilde's son, had renewed the offer. Ethelbert White, the illustrator, was unable to go to France to do the drawings on the spot, therefor photographs were used, borrowed from Wilde's bibliographer Stuart Mason, who also gave details for the coloring. The title page illustration depicts the Chalet Bourgeat where Wilde had written most of the letters. It is printed in four colors: blue-green, pink and brown, but in trying to obtain the misty effect which Beaumont wanted, the colors were softened to make the image indistinct and inferior to the original design. much more successful are the two illustrations, each done in two colors, of the Hotel de la Plage and the church and shrine of Notre Dame de Liesse, to which Wilde had made several pilgrimages. Liesse was an old word for joy, but the weeping willows on the endpapers and the barred decoration of the cover, suggesting Wilde's ostracism from English society, reflect more truly his own plight..' (ABMR article, August 1981). The binding is sewn through the endpapers. The colophon device is design 2 of the Beaumont Press. Cloth rubbed. Boards sunned along edges, Ex Libris on inside front cover. Block uncut at foredge. Binding in overall good,+ interior in fine condition. (Inventory #: 40550)
$400.00 add to cart or Buy Direct from
Eric Chaim Kline Bookseller
Share this item