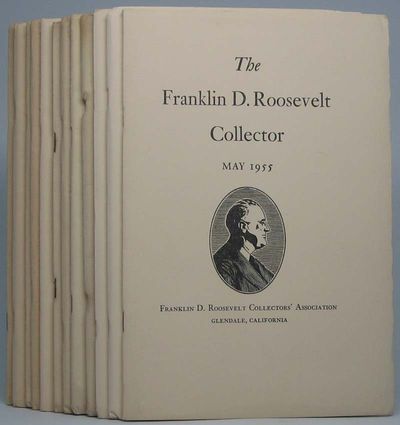 by VALENTINE, John (editor)
Glendale, CA: The Franklin D. Roosevelt Collectors' Association, 1948. Paperback. Near-inclusive 11-issue run for this 8-year span, lacking 3 issues (November 1953, November 1954 and November 1955). Small 4to. Stiff tan wrappers. Various paginations (most issues ca. 25-42pp). Frontispieces (excepting May 1953 issue), occasional illustrations. Good plus to near fine. Most issues to very good to near fine, with only the second issue good plus (wrappers bit age toned and discolored, with wrinkling throughout). Fine grouping of 11 issues, accompanied by a printed letter from president Donald S. Carmichael that accompanies the first issue and introduces it and also a few subscription renewal notices. Seven issues are still in their original mailing envelopes. Also present are two Typed Notes Signed and four Autograph Notes Signed from Valentine, each on buff heavy stock 5½" X 3½" penny postal cards, the first two TNsS (chronologically) from Decatur, IL and dated 26 June and 7 July 1947, the second two ANsS from Glendale, CA and dated 26 June 1948 and 7 January 1949, the last two ANsS being picture postcards from New York, NY and London, England and dated 16 July 1949 and 7 June 1950. All addressed to Elmer R. Underwood. Very good. Friendly FDR chitchat about the Association, membership ("We have had 38 new members (!) since The FDR Collector came out"), new FDR books, etc. The New York picture postcard features a portrait of FDR and the London picture postcard depicts the President Roosevelt Memorial in London's Grosvenor Square. Valentine was for a time Ralph G. Newman's business partner at the Abraham Lincoln Book Shop that Newman founded, and later sold books and even published a Stephen Crane bibliography after relocating to Glendale, California. Underwood (1896-1982) was a noted Chicago Civil War collector and one of the handful of devotees, along with Abraham Lincoln Book Shop founder Ralph G. Newman, who founded the Chicago Civil War Round Table in 1942 -- the first of what would eventually become hundreds of similar Civil War Round Tables around the country. How long this publication continued publishing is surprisingly unclear -- references may be found to the presence of 1955 issues in institutional collections, but nothing later than that -- suggesting that the May 1955 issue here may well be the final issue. A fine and scarce grouping, in any case, with accompanying autograph material from its one and only editor. Issues of this journal are rather uncommon, and lengths of any run are rarely seen. This fine gathering is also accompanied by seven issues of Valentine's FDR for sale lists (numbers 3 through 9), each titled "Books, Pamphlets, Autographs and Allied Material Relating to Franklin Delano Roosevelt and His Times," each 4to and several pages in length, generally very good. ALSO present are two identically-titled lists (!) from Valentine's one-time business partner, Ralph G. Newman of the Abraham Lincoln Book Shop, probably preceding Valentine's lists. Also 4to in size and a bit lengthier, this "List No. 2" and "List No. 11" features a pictorial front wrapper. (Inventory #: 40870)
$400.00 add to cart or Buy Direct from
Main Street Fine Books & Mss.
Share this item

Main Street Fine Books & Manuscripts accepts VISA, MasterCard, Discover and PayPal. Checks are welcome. Institutions will be accommodated as their procedures require. Illinois residents will be charged 8.25% sales tax. Every effort has been made to describe each book and any defects accurately. If an item proves unsatisfactory for any reason, it may be returned within seven days. We would appreciate a courtesy call if an item is being returned. Member ABAA, ILAB.
More from this seller

New York : Mason Brothers , 1864
(click for more details about General Butler in New Orleans. History of the Administration of the Department of the Gulf in the Year 1862: With an Account of the Capture of New Orleans, and a Sketch of the Previous Career of the General, Civil and Military)

The Warren Buffett Portfolio: Mastering the Power of the Focus Investment Strategy

New York : John Wiley & Sons , 1999
(click for more details about The Warren Buffett Portfolio: Mastering the Power of the Focus Investment Strategy)
View all from this seller>