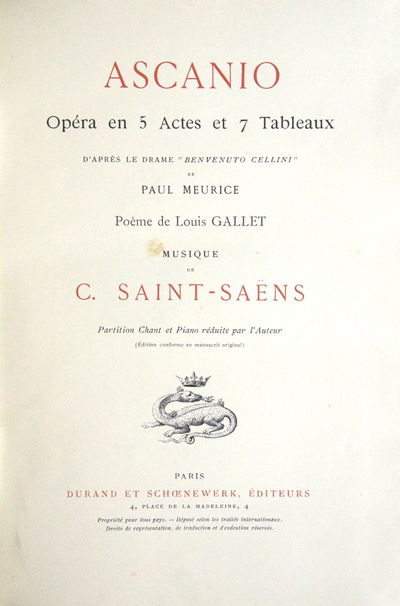 With publisher's handstamp to lower outer corner of half-title. Supplement ("Annexe") to pp. 388-391.

Ascanio, to a libretto by Louis Gallet after Paul Meurice's play Benvenuto Cellini, was first performed at the Paris Opéra on March 21, 1890.

"Composed in 1887-8, Ascanio makes a grand opera of a play of intrigue set in Paris in 1539. Meurice, whom Saint-Saëns knew well, had collaborated with Alexandre Dumas père on his novel Benvenuto Cellini, published in 1843, and had fashioned a successful play from the story in 1852. To avoid confusion with Berlioz's opera the title was changed (even though Cellini is still the principal character in the drama) and a scene in the play where Cellini runs out of metal when casting a statue was not included. The choice of an episode from Cellini's life that took place in France at the court of François I satisfied Saint-Saëns' longstanding desire to base his operas on French history, and by casting the third act as a fête at Fontainebleau (a departure from Meurice's play) he found an opportunity for an extensive divertissement of 12 dances very much in the spirit, and to some extent in the style, of French Baroque opera." Hugh Macdonald in Grove Music Online. (Inventory #: 26255)
$248.00 add to cart or Buy Direct from
J. & J. Lubrano Music Antiquarians
Share this item