THE AFFIDAVIT OF ANDREW JACKSON, TAKEN BY THE DEFENDANTS IN THE SUIT OF ROBERT MAYO VS. BLAIR & RIVES FOR A LIBEL, ANALYSED AND REFUTED. (THIRD EDITION, WITH SUPPLEMENTARY NOTES.) BY ROBERT MAYO, M.D. AUTHOR OF SKETCHES OF EIGHT YEARS IN WASHINGTON, &C. &C 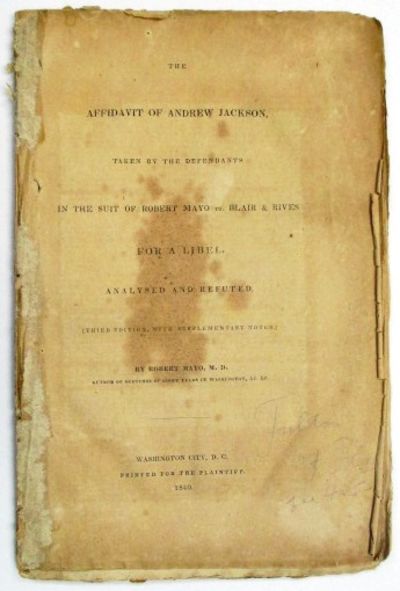 by Mayo, Robert
Washington City, D.C.: Printed for the Plaintiff, 1840. 80pp, disbound, some toning and scattered foxing. Title and last leaf with some wear to blank inner margin. Good+.

Mayo began as a Jacksonian Democrat, became disenchanted, and then expressed with a vengeance his loathing of the Democrats. "An important chapter in Texas history. Mayo became acquainted with Houston in 1830, wormed from him and others the plans of the contemplated invasion of the Mexican province of Texas, the secret cryptographical correspondence, etc., and then sent all his information to President Andrew Jackson. The burden of the work goes to prove that the President was in collusion with Houston and the other conspirators in the scheme to wrest Texas from the Mexicans" [Eberstadt].
Mayo made these charges in 'Political Sketches of Eight Years in Washington'. But Blair & Rives's 'Globe' said Mayo had stolen the material-- particularly Jackson's letter to Governor Fulton of Arkansas-- to support his claims. Mayo then sued Blair & Rives for libel. Jackson's affidavit said the letter had been swiped from his files, and that Mayo was the culprit. "Mayo promptly got into action," this pamphlet laying out the whole story [Streeter TX 1351]. Mayo is loaded for bear: the first edition, also printed in 1840, had only 23 pages.
105 Eberstadt 294 [this 3d ed.]. Streeter TX 1351 note. Cohen 12013. Not in Graff, Decker, Soliday, Jenkins BTB, Raines, Rader, Marvin, Harv. Law Cat., Marke. (Inventory #: 33069)
$500.00 add to cart or Buy Direct from
David M. Lesser, Fine Antiquarian
Share this item
David M. Lesser, Fine Antiquarian Books LLC
Offered by

A REVIEW OF THE LIFE AND CHARACTER OF ARCHBISHOP SECKER

New York : Hugh Gaine , 1773
(click for more details about A REVIEW OF THE LIFE AND CHARACTER OF ARCHBISHOP SECKER)

New York : Published by G. Lane & P,P. Sandford , 1843
(click for more details about A MISSIONARY NARRATIVE OF THE TRIUMPHS OF GRACE; AS SEEN IN THE CONVERSION OF KAFIRS, HOTTENTOTS, FINGOES, AND OTHER NATIVES OF SOUTH AFRICA. BY SAMUEL YOUNG, TWELVE YEARS A MISSIONARY IN THAT COUNTRY. REVISED BY THE EDITORS)
View all from this seller>