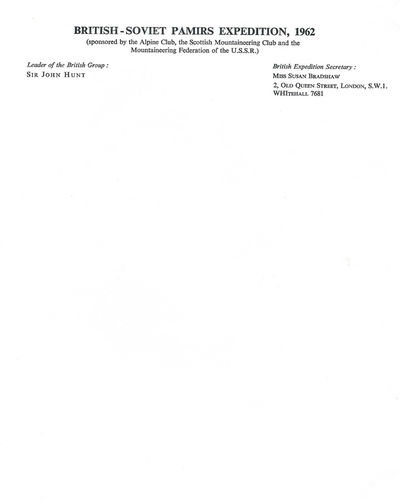 by [Lowe, George]
London: The Alpine Club, no date [circa 1962] From the library of mountaineer George Lowe. Single white leaf, lettered in black. Fine, with only some faint creasing to the extremities, otherwise clean and completely unused. A fresh piece of Himalayan mountaineering ephemera. This piece of letterhead stationery is an example of the sheets used for the 1962 British-Soviet Pamirs Expedition, a collaborative effort sported by the Alpine Club, the Scottish Mountaineering Club, and the Mountaineering Federation of the U.S.S.R. After the successful 1953 British Mount Everest Expedition, George Lowe, along with his former climbing teammate Wilfrid Noyce, again followed expedition leader John Hunt into the Himalayas for this expedition. Unfortunately, the British-Soviet Pamirs Expedition was the final excursion for Noyce and fellow Ian Smith, who fell to their deaths while descending form the summit of Mt. Garmo.. Fine. (Inventory #: WGL039)
$50.00 add to cart or Buy Direct from
B & B Rare Books
Share this item

New York: Covici-Friede , 1934
(click for more details about A Cool Million: The Dismantling of Lemuel Pitkin)