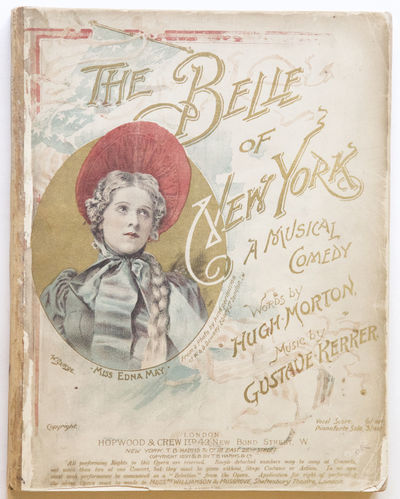 With a bust-length portrait of Edna May (cast in the role of Violet Gray in the George Lederer Casino Theatre Company of New York production) to upper wrapper.

Wrappers worn; edges chipped with minor loss; tear to lower repaired with tape; title label laid down to spine. Slightly worn; English bookseller's handstamp to title. "The Belle of New York (1897) had only a modest run in New York but became Kerker's most popular work and the one by which he is best remembered, with almost 700 performances in London and many more on tours; several of its melodies are inspired by marches or lively dances, and the vocal lines have an unusually restless character with dotted rhythms and repeated notes." Deane L. Root in Grove Music Online. (Inventory #: 27606)
$72.00 add to cart or Buy Direct from
J. & J. Lubrano Music Antiquarians
Share this item