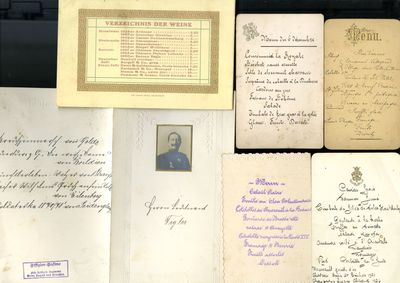 by anon
1900. Some restaurant menus, but most for occasions (weddings, first communions, royal dinners, and various other festivities) as well as countless dinner parties, some very professionally printed, some handwritten in a variety of styles. The bulk of the material is from 1890-1920 and the early 1930s into the 1950s, almost all in Europe, though it trickles into the late 1990s. England, Belgium, Germany, France and many from Luxembourg. It includes a number of menus from during the two world wars and a few referencing them (a number of the menus appear to be from an RAF chef whose identification card is included in the collection). Like many collections of this sort, while it was clearly collected first hand in part, it's hard to tell which menus the collector gathered at the time and which were collected later or if, perhaps, the earlier group was passed down and added to. 146 pieces in all, a remarkable collection that stretches from the height of 19th century French cuisine well into the 20th century - a tumultuous period in Europe, to be sure, but one where at least some people, evidently, continued to entertain. Held in three binders. Quantity Available: 1. Shipped Weight: 2-3 kilos. Category: Cooking, Wine & Dining; Inventory No: CAT000456. (Inventory #: CAT000456)
$1,250.00 add to cart or Buy Direct from Pazzo Books
Share this item

A Brief History of Seven Killings

New York : Riverhead , 2014
(click for more details about A Brief History of Seven Killings)
View all from this seller>