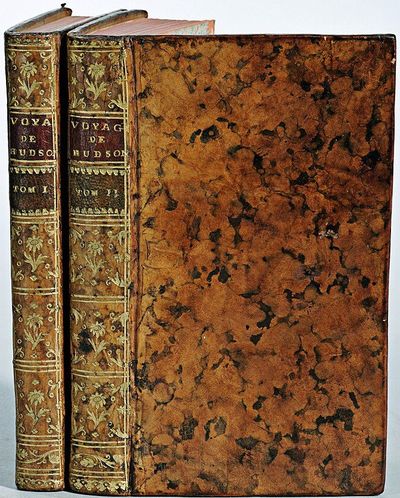 Henry Ellis was a traveler, hydrographer, and colonial governor, returned from Italy in 1746, just in time to find an expedition to search for a north-west passage on the point of sailing. He appears to have been in easy circumstances; his name stands in the list of subscribers to the north-west expedition, and he had sufficient interest to get attached to it, nominally as agent for the committee, and really as hydrographer, surveyor, and mineralogist, the expedition, consisting of two vessels, the Dobbs galley of 180 and California of 150 tons, left Gravesend on 20 May 1746, joined the Hudson's Bay convoy in Hollesley Bay, and finally sailed from Yarmouth on the 31st. They parted from the convoy on 18 June, made Resolution Island on 8 July, and after a tedious passage through Hudson's Straits rounded Cape Digges on 8 August, and on the 11th 'made the land on the west side the Welcome, in latitude 64° N.' Bad weather drove them to the southward, and prevented their doing anything more that season. They wintered in Hayes River, in a creek about three miles above Fort York, where a quarrel with the agent of the Hudson's Bay Company gave an unwonted piquancy to the dark and weary days. They suffered much from scurvy, the prevalence of which Ellis attributes to their having got two kegs of brandy from Fort York for their Christmas merrymaking, and in a minor degree to the 'governor' not permitting the Indians to supply them with fresh provisions. On 29 May 1747 the ice broke up, and they were able to warp to the mouth of their creek; on 9 June they got down to Fort York. There they were allowed to get some provisions and stores, and on the 24th cleared the river and 'stood to the northward on the discovery'. On 1 July each of the two ships sent away her long-boat, but, owing apparently to some ill-feeling between the two captains, without any prearranged plan for working in concert. The consequence was that they separately went over the same ground, discovering, naming, and examining the several creeks and inlets on the west side of Hudson's Bay, the double examination perhaps compensating for the confusion arising from the double naming. Before the season closed in they had satisfied themselves that the only possible exit from Hudson's Bay on the west must be through the Welcome, and that very probably there was no way out except that on the east, by which they had come in. The result may not seem much; but as it served to put an end to the idea that the passage must lie through Hudson's Bay it was, at least, so much gain to accurate knowledge. After 21 August the weather broke, and they decided in council 'to bear away for England without further delay.' On the 29th they entered Hudson's Straits, passed Resolution Island on 9 September, and arrived at Yarmouth on 14 Octivwe. Ellis's share in the work of the expedition had really been very slender, but the reputation of it has been commonly assigned to him by reason of the narrative which he published the following year under the title A Voyage to Hudson's Bay, by the DobbsGalley and California in the years 1746 and 1747, for Discovering a North-West Passage (1748); a work which with many valuable observations on tides, on the vagaries of the compass, and on the customs of the Eskimos, a people then practically unknown, mingles a great deal of speculation on the certain existence of the passage, on magnetism, on fogs, on rust, and other matters, all more or less ingenious, but now known to be wildly erroneous. Such as it was, the book commended its author to the scientific workers of the day, and on 8 February 1748-9 he was elected a fellow of the Royal Society. Possibly in acknowledgment of his scientific labors, but more probably by some family interest, he was afterwards appointed successively governor of Georgia and of Nova Scotia, from which employment he retired about 1770. He seems to have spent his later years as a wanderer on the continent, was at Marseilles in 1775, and died at Naples on 21 January 1806.

Some dark spot to spine else a very good copy. (Inventory #: E0529)
$950.00 add to cart Available from Book Collector
Share this item
The Book Collector, Inc
Offered by