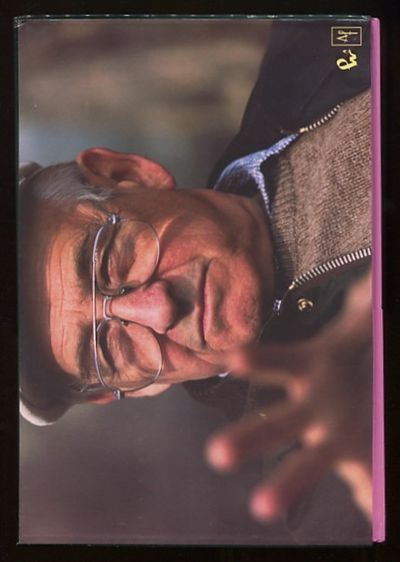 by {Wajda, Andrzej} Kosinska, Barbara, ed.
Warsaw (Poland): Wydawnictwa Artystyczne i Filmowe. Fine. (c.1996). 1st Edition (English version). Hardcover. (two volumes without dustjackets (as issued), in cardboard slipcase) [books are in perfect condition; the slipcase very close to it, with just slight bumping to one corner (the set was in the original shrinkwrap when received by us, which was removed only to permit proper cataloguing)]. (B&W and color photographs, sketches) Beautifully-produced two-volume survey of the ouevre of the great Polish filmmaker (who passed away earlier this year), lavishly illustrated with (mostly full-page) color and black-and-white photographs, as well as numerous reproductions of Wajda's own drawings. (Most of the photos are the work of Renata Pajchel.) The text (entirely in English in this edition) is wide-ranging, including production histories, Wajda's own reminiscences and musing, review excerpts (many translated from Polish), full credit information, etc.--it's really the most thorough "films of" treatment that you could hope for, covering all his work from A GENERATION (1955) through MISS NOBODY (1996), including of course his best-known films: ASHES AND DIAMONDS (1958) and MAN OF IRON (1981). The only complaint that one might possibly have is that it's a "incomplete" chronicle of the director's work, because Wajda went on making films for another twenty years: his final feature film, AFTER IMAGE, premiered at the Toronto International Film Festival just a few weeks before his death at the age of 90, and has been submitted as Poland's official entry for this year's Best Foreign-Language Film Academy Award. (For shipping outside the U.S., additional charges will be requested; please enquire before ordering if this is a concern.) . (Inventory #: 22437)
$300.00 add to cart Available from ReadInk
Share this item
ReadInk
Offered by

Death of an Old Goat

New York : Walker and Company , 1977
(click for more details about Death of an Old Goat)

The Villars-Manningham Papers, and Other Stories of Sherlock Holmes

Scarborough, Ont. : Catalyst , (c.1978)
(click for more details about The Villars-Manningham Papers, and Other Stories of Sherlock Holmes)
View all from this seller>