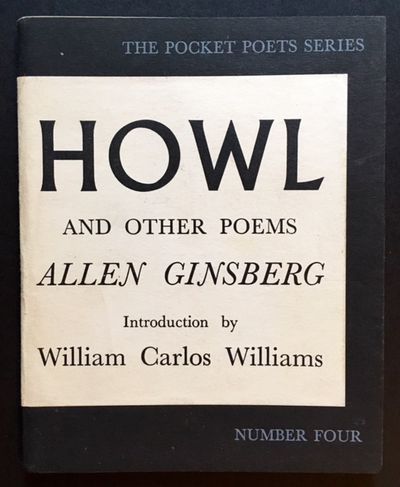 by Allen Ginsberg
San Francisco: City Lights Pocket Bookshop, 1956. Original wraps. Near Fine. A remarkable Association copy of the 1956 correct 1st edition. This copy not only conforms to all the original issue points but is in beautiful, near-pristine condition. Furthermore, THIS COPY IS SIGNED BY 5 OF THE KEY FIGURES IN THE BOOK'S GENESIS: 1) ALLEN GINSBERG (on the title page); 2) LAWRENCE FERLINGHETTI (on the copyright page); 3) LUCIEN CARR (on the dedication page); 4) WILLIAM BURROUGHS (also on the dedication page); and 5) CARL SOLOMON (on the first blank endpaper). In other words, this copy is signed by the book's author, its publisher and by 3 of its 5 dedicatees (only Jack Kerouac's and Neal Cassady's signatures are missing from this copy). Notably, of the 5 signatures, all critically important to the birth and evolution of "Howl", Lucien Carr's appears to be the most elusive. We know that Carr's relationship with the Beats grew tense early on and that he insisted his name be removed from all subsequent printings of "Howl". We also know that Carr himself introduced William Burroughs (an old friend from their St. Louis upbringing) to Jack Kerouac and Allen Ginsberg --and that Carr's infamous career at Columbia (as documented in the 2013 film "Kill Your Darlings") saw him as a very important muse to this budding literary scene. A fresh, tight copy, immaculate internally and easily Near Fine overall, while legitimately approaching Fine (even down to its unrusted staple). Also includes a hand-made chemise (signed by Ginsberg at a later date), a folded cardboard reproduction of the book's front cover which, among other things, capably protects the fragile 1st edition and no doubt helps to explain its remarkable condition. Of the 1,000 copies of "Howl" initially published, this must certainly rank as among the very most historic and significant. (Inventory #: 13503)
$45,000.00 add to cart or Buy Direct from Appledore Books
Share this item
Appledore Books
Offered by

Jackson Pollock: A Catalogue Raisonne of Paintings, Drawings, and Other Works (Vols. 1-4)

by Edited by Francis Valentine O'Connor and Eugene Victor Thaw

The Fifth Regiment Connecticut Volunteers: A History Complied from Diaries and Official Reports

Hartford, CT : Wiley, Waterman & Eaton , 1889
(click for more details about The Fifth Regiment Connecticut Volunteers: A History Complied from Diaries and Official Reports)
View all from this seller>