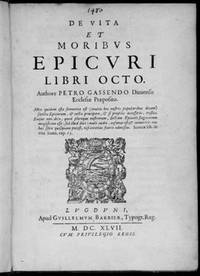 by GASSENDI, Pierre
Woodcut printer's device on title & one engraved plate with a port. of Epicurus. 4 leaves, 5-236, [18] pp. 4to, cont. French sheep (head & foot of spine neatly repaired, several signatures lightly browned), single gilt fillet round sides, spine richly gilt, red morocco lettering piece on spine. Lyons: G. Barbier, 1647. First edition of an important book; this life of Epicurus, which emphasized his philosophy of physics, was the foundation of Gassendi's Epicurean atomism. His atomic theory was applied to chemistry by Boyle and adopted by Newton in his new mechanical philosophy. "Before Galileo and Descartes had succeeded in combining mathematics with mechanics, the chief refuge of hard-headed opponents of scholastic verbalism and Renaissance Platonism was the tradition of Greek atomism...Its chief representative during the period of Cartesian domination was Gassendi, who stands both as the climax of Epicurean atomism of the Renaissance in its accommodation to a mathematical science of nature, and as the first of the explorers of the implications of that science for the traditional empirical philosophy of knowledge. Gassendi is thus with Hobbes one of the fathers of 'scientific' empiricism...Gassendi indeed fancied himself the creator of the great rival scientific system to that of Descartes, the system founded on sound experience. History has reserved that distinction for Hobbes; yet it probable that Gassendi contributed far more to the actual advance of scientific ideas than his more consistent and gifted British fellow-worker."­J.H. Randall, The Career of Philosophy, Vol. I, pp. 521-23. Fine unpressed copy. Bookplate of René Escande de Messières. Partington, II, pp. 458-66. (Inventory #: 1019)
$8,500.00 add to cart or Buy Direct from
Jonathan A. Hill, Bookseller
Share this item
Jonathan A. Hill, Bookseller, Inc.
Offered by