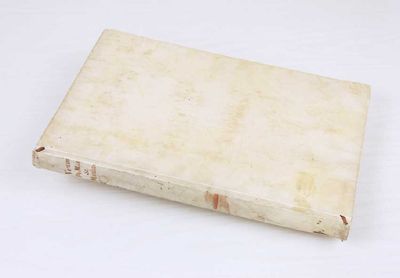 by VIVIANI, Vincenzo
Two full-page engraved plates on one double-page sheet, two woodcut plates, & numerous woodcut diagrams in the text. Woodcut of Medici arms on titles which are printed in red & black. Two parts in one vol. 8 p.l., 154 pp.; 2 p.l., 154 pp., one leaf of errata. Folio, cont. vellum over boards (a bit of foxing). Florence: J. Cocchini, 1659. First edition and a splendid copy of the author's first book in which Viviani attempted a reconstruction of the important fifth book of Apollonius' Conics, a text at that time lost. The Conics was in eight books, but only the first four have come down to us in the original Greek. There was some knowledge of the fifth book due to hints supplied by other Greek mathematicians and it was this information which Viviani used. While Viviani was working on his reconstruction of the fifth book, Borelli discovered in an Arabic manuscript in the Medicean Library the text of books five through seven (book eight is lost). These were then translated into Latin by Borelli and Ecchellensis and were published in 1661. The similarity between Viviani's reconstruction and the actual text was very great. It is Book V which has particularly evoked the admiration of modern mathematicians. It "reveals better than any other the giant intellect of its author. Difficult questions of maxima and minima...are here treated exhaustively...Here are also found the germs of the subject of evolutes and centres of osculation."-Cajori, History of Mathematics, pp. 40-41-(on Apollonius). In this book, Viviani also "published his results on what is now called the Steiner problem (although the designation Fermat problem would be more appropriate) as an appendix to his celebrated reconstruction of the fifth book of Apollonius's Conic Sections where the ancient author treated maximum and minimum problems related to conic sections."-Hildebrant & Tromba, The Parsimonious Universe, p. 92. Viviani (1622-1703), a disciple and biographer of Galileo, established his reputation with this work. Fine, crisp, and large copy with half-title. Preserved in a box. ❧ Cinti 135. Riccardi, II, 625-"Raro e pregiato.". (Inventory #: 4955)
$10,000.00 add to cart or Buy Direct from
Jonathan A. Hill, Bookseller
Share this item
Jonathan A. Hill, Bookseller, Inc.
Offered by