A Complete Body of Husbandry; collected from the Practice and Experience of the most considerable Farmers in Britain. Particularly setting forth the various Ways of Improving Land, by Hollow Ditching, Dreining, Double Plowing, Grafing, Enclosing, Watering and Manureing. With Particular Directions for the Fertilising of Broom-Ground, Heath-Ground, Furze, Bushey, and Chilturn-Ground: Also the Method of Improvement, by affortting proper Plants to Lands, and of shifting Crops. To which is added Several Particulars relating to the Preservation of the Game; and stated Accounts of the Expence and Profits of Arable, Pasture, Meadow and Wood Lands 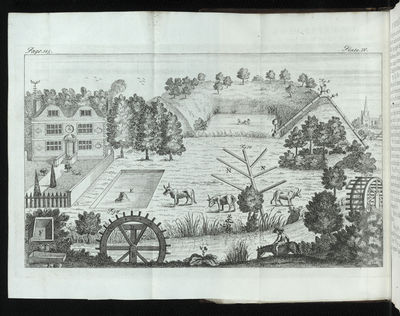 by BRADLEY, Richard
Four folding engraved plates. Title printed in red & black. 2 p.l., xi, 372 pp., 2 leaves of ads. 8vo, cont. panelled calf (minor rubbing). London: J. Woodman & D. Lyon, 1727. First edition and a lovely copy. Bradley (1688-1732), first professor of botany at Cambridge, was one of the earliest British writers to treat agriculture as a science. His writings were prolific, including about twenty volumes dealing with agriculture. This book is one of his most important. "Cost of production was beginning to interest farmers more then it had done. For a hundred years the business had been steadily becoming more commercial. Instead of being rich because he grew a lot to eat, a man was beginning to find that he was only rich if he grew a lot to sell, and naturally he wanted to sell at a profit. To do that he must know what it cost him to grow the produce...and so writers began to insert costings in their books and Bradley was one of the earliest to do this. The Complete Body contains numerous costs, but I suspect they were of common knowledge rather than anything more immediately collected and closely scrutinized, yet they must have been accurate enough by the author's readers as not unreasonable."-Fussell, I, pp. 111-12. Fine crisp copy. ❧ D.S.B., II, p. 390. (Inventory #: 2763)
$1,850.00 add to cart or Buy Direct from
Jonathan A. Hill, Bookseller
Share this item
Jonathan A. Hill, Bookseller, Inc.
Offered by