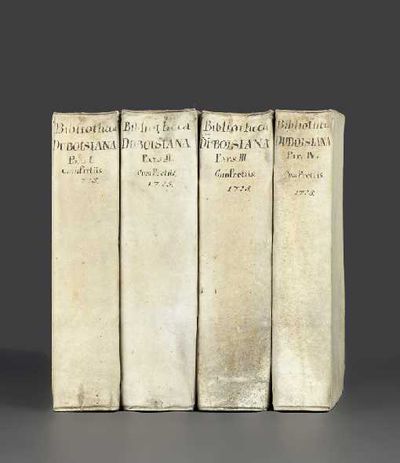 by (AUCTION CATALOGUE: DU BOIS, Guillaume, Cardinal)
Four vols. 8vo, cont. vellum over boards (covers of Vol. I lightly stained, spines dust-soiled, lightly foxed throughout as usual). The Hague: J. Swart & P. de Hondt, 1725. With its almost 30,000 lots this was the largest sale ever held in any country up to 1725, a record not broken until the Thott sale (Copenhagen: 1789-1795) and the Heber sales of the 1830s. The Du Bois sale lasted for nearly two months. This extraordinary library was the creation of the Abbé Jean-Paul Bignon (1662-1743), who was for many years secretary of the Académie des Sciences. When, in 1718, he was appointed Bibliothécaire du Roi, a position he occupied until 1741, he sold his library of approximately 50,000 volumes in order to avoid a conflict of interest. The buyer was the financier John Law (1671-1729), of "Mississippi Bubble" fame. Financial reversals caused Law to almost immediately resell the library for 50,000 livres to Cardinal Du Bois (1656-1723), the immensely rich but ill-famed first minister during the minority and under the reign of Louis XV (his misdeeds may have been exaggerated by the Duc de Saint-Simon, who hated him). Guigard and others state that Law's sale of the library took place in 1723, but it cannot have been later than December 1720, when Law secretly left France after the Mississippi Bubble had burst. Following Du Bois's death, the library was sold for 65,000 livres to "the booksellers of Paris" who immediately sold it to one "Guiton," who, in turn, sent it to The Hague for auction. This library contained many famous rarities, including editiones principes of Aristophanes, Homer, and Pliny, incunabula printed on vellum, Spanish romances of chivalry, and illuminated manuscripts. Many of the finest books and manuscripts were acquired by a collector named Milsoneau. The Marquis de Paulmy acquired them from Milsoneau and today they are the foundation of the library of the Arsenal. Fine set and priced throughout. ❧ Guigard, I, pp. 238-39 & 270-71. Peignot, p. 96. Taylor, Book Catalogues, pp. 18, 102, 108, 113, 129, 207, 228, & 239. (Inventory #: 5129)
$19,500.00 add to cart or Buy Direct from
Jonathan A. Hill, Bookseller
Share this item
Jonathan A. Hill, Bookseller, Inc.
Offered by