A Treatise on Agriculture and Rural Affairs 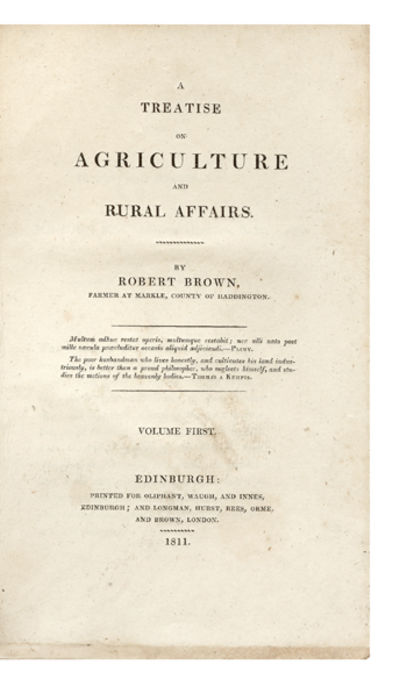 by BROWN, Robert
Six engraved plates (somewhat dampstained). xix, 477 pp.; viii, 459 pp., one leaf of errata (with a long tear neatly repaired). Two vols. 8vo, cont. blue boards (quite decently backed with matching modern paper), uncut. Edinburgh: Oliphant et al., 1811. First edition. "A more ambitious and prolific writer was Robert Brown of Markle near Haddington, who lived from 1756 to 1831. He was magnificently appreciated in his own day, a situation in which few writers are happy enough to find themselves. He was eulogised by one of his admirers as having produced a work second only to the Bible."-Fussell, The Old English Farming Books, III, p. 13. Brown, a farmer who practiced several important experiments on his property, contributed many articles to the Edinburgh Farmer's Magazine, of which he was editor for fifteen years. Some of his contributions were translated into French and German. In the present work, Brown advocated ploughing all uncultivated fields to keep the soil clean and rich. Very good set. Some browning throughout. ❧ ODNB. (Inventory #: 2688)
$1,500.00 add to cart or Buy Direct from
Jonathan A. Hill, Bookseller
Share this item
Jonathan A. Hill, Bookseller, Inc.
Offered by